Ghosts of Races Past 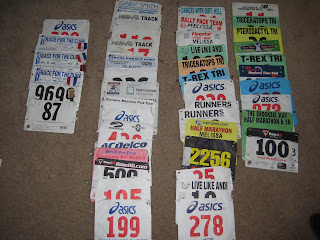 I know I mentioned earlier that I had found a bunch of old race bibs while getting things situated for our upcoming move. I am not very organized, and I make piles, so these were found some in the filing cabinet, and the rest in piles in drawers and such. Since I found so many, I started searching them out in the house. A few were still in the car (yikes!)

I found my first marathon bib with pace team bib from Oct 2004. It was in the filing cabinet all nice and neat. It seemed very appropriate timing given my race this weekend. That was a long time ago, before kids, when training only had to be balanced between me and my husband. For a full recap, check out my guest blog post over at Chasing Atlanta that I wrote recently. I finished in 4:00:36, with one pit stop at White Castle, of all places, to use the restroom. I didn't own a Garmin yet. I just noticed yesterday that White Castle was the sponsor of the pace team. How appropriate! 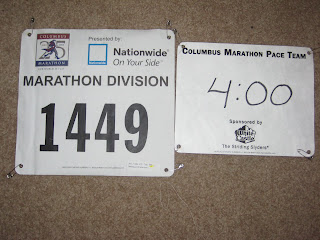 I also came across this one with pace bib AND split chart, my second marathon in Oct 2007 and first real attempt to qualify for Boston: 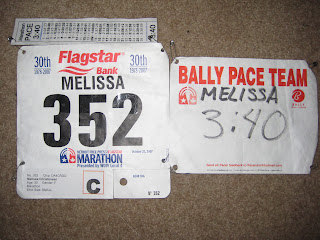 Big Time Fail! I did finish, and I did have a PR (3:54:12), but I mentally shut down around mile 22/23. I had stayed on Boston pace until about mile 14/15, and then the wheels fell off. I tried just running the rest for fun as my friend Dave suggested, who saw me on the course right after I fell of pace to qualify. It got hot. I hadn't trained properly, I was a fairly new mom (Keira was only 16m) and didn't get in the miles I needed, either mentally or physically. I found myself calculating ridiculous splits in my head (I am a math person) as far as how fast or slow I had to run to beat my past PR. Like, can I walk an 11min/mile to beat 4:00? Thankfully, I did pull myself together to finish with a PR by a few minutes, but my second half of the race was something like 14 or 15 minutes slower than the first.

Fast forward one more child and several years, a couple halfs, and my first season of tris to here, April 2010: 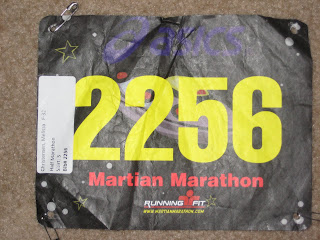 Last year's Martian Half bib. I didn't really train for this race aside from swimming through the winter for a spring Olympic tri and doing a few 8 and 10 milers. I was running because I had girlfriends running it and I said I would if they did. I remember looking at the calendar and thinking, oh no, I need to get in a 10 mile run tomorrow to be ready, uh oh! I had a blazing PR of 1:42:21. I started out fast and just kept going. I kept waiting to have to slow down, and I never did. It was with this time that my friend Dale, and ultra runner, convinced me that I should run a fall marathon to try to qualify for Boston. The charts said I could do it. Well, if the charts say so.... OF COURSE I can do it, right? I ended up spraining my ankle at a mountain bike race mid summer and took a month off running. I got too far off my marathon training plan to get back on mid plan, and decided to go on vacation marathon weekend with my husband so he could race his mountain bike. I was pretty bummed out about this and felt really down. I found this race to do as a consolation race. 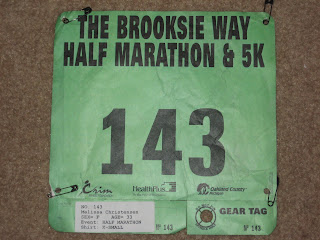 I really surprised myself with another PR here, given the course and the recent ankle. It still hurt, but my physical therapist said it could still hurt for a long time, and if I was able to cope with the pain and it wasn't getting worse, that eventually it would get better while continuing training. It has, for the most part gotten better, but it needs ice everyday still. The first 5 miles were downhill. The second 5 miles were uphill, and the last 3 were sort of rolling. It was also partially on cinder trail and dirt roads, so less impact for the wobbly ankle, but also less stable. I felt my ankle a lot on the trail portions and it made me slow down, as well as the hills. I somehow pulled out a 1:42:08. I had a couple fun runs since, but nothing really to test me. So now we are here, a few days from Marathon #3. I learned a cool bit of trivia today, the .2 at the end of a marathon is actually shorter than the .2 of a 10K. It has to do with the fact that a marathon is 26 miles and 385 ft, where the 10K is converted to miles. The difference is about 22ft, but they both round down to .2 miles. I am oddly excited about this. It means that when I hit the 20 mile mark, I will have LESS than a 10K to go. It is small, but according to my husband, anything that makes it feel easier has got to help, right?

I feel really good, except I have been having nightmares about qualifying for Boston. Two nights ago, I dreamt I got to a point in the course where no one knew where to go, and I ended up 2 miles short, afraid to cross the line because the timing would get all messed up, with no minutes to spare. I was doing more math in my dream, I had to do my 2 miles in 8:00 and I would get 3:40 exactly, even after the mess of getting lost. I wanted to just cross the line at 3:24 and call it done, but then I woke up before anything else happened. This is really silly because this course is an out and back, and I know that I won't be running alone at any part, or that the volunteers will be that confused. Last night I had a dream that we all got this horrible flu so I couldn't run. I am hoping tonight won't be so strange.

I also had a friend ask me if it was comfortable to run at race pace or if I planned to be uncomfortable the whole time. For a 5K, I hurt the entire time, but it isn't that long. I hope to not hurt for an entire 3:30/3:40 (or longer). My run on Saturday averaged to be an 8:01 pace, and while it felt quick, it was not painful, but it was only 8.65 miles. To do that 2 more times will likely hurt a bit. Adrenaline is an amazing thing. I do expect it to be hard, and I just hope I can keep going through the pain. I want this, and I AM going to do it.

In the clean version of Eminem, "Success is my only option, failure's not" "Feet fail me not this may be the only opportunity that I got" "You can do anything you set your mind to"

On a more spiritual note, this will also be keeping me going: D&C 89:18, 20 And all saints who remember to keep and do these sayings, walking in obedience to the commandments, shall receive health in their navel and marrow to their bones; And shall run and not be weary, and shall walk and not faint.

You will do great at Martian! You should make a collage of your race numbers.

You have a much better bib system than me! Mine are all over...except now I stick them to my desk at school! I made a bib scrapbook for a friend of mine....she has them all over her kitchen with date, time, and who she ran the race with.

You are going to rock this!!!

You should make a bib book, I made one, super easy, used a cover and one large ring to keep it all together

I think it's awesome that you have all those bibs - and stories to go with it! :)

Best of luck this weekend. You got this!!!

Very cool! Most of mine end up in the trash can. I do have a few in a drawer near my desk. My first marathon, Boston, #9 from R&R San Antonio, just because that was my favorite number. And I save all my #2 bibs from the Kayla Race. My sister Kaitlin is always #1 there.