So, I bet you guys were anxiously wanting to know how the Boston Marathon went, right?  And I ended up doing my blogging about it on the Coeur blog, and not here  (and I am backdating this post so it shows up in the right spot chronologically).  I meant to go back and copy, paste, and add pictures, but since I didn't do that yet, here are the links to the Coeur webpage.  It was awesome being a guest blogger for them and I loved the extra support of being part of the Coeur team.  You can read all about the weekend at these links:

Final Dispatches from Boston: Our Heart Will Always Beat on Boylston

I need to go back and add more pictures.  Also, please note that while the majority of the content on the Coeur page was mine, Kebby and Reginal Holden had the final edit, and added information about my other teammates racing there and the weekend in general.  I unfortunately could not meet up with either of them, but I did get to see Cristina, Anita, and Stacy while out there.  Its a huge city and a huge race.  It really was the best birthday ever!!!!
Posted by Unknown at 12:01 PM No comments:

I'm getting pretty excited for Boston.  Its in 12 days!  Wow!  I haven't really written as much about my training as I expected I would this time around.  I've just been busy trying to juggle life, so I just thought I would do a brief summary:

I was scheduled to do 5 20 milers.  3 of them were on snow days from school or days where it was so ice covered outside that running outside was not an option.  The 4th 20 miler was scheduled on a terrible day (rain/sleet), but I had enough foresight to move it up to the only nice day of that week, and rocked it out.  My last 20 miler was a bit dicey.  The weather was crazy windy and my splits were all over the place.  It was nothing like my training last year where I knocked every long run out of the park crushing my splits.  Granted, I took the actual splits from last year and aligned them with a tougher a plan, so I was working towards something more aggressive.  Still, it is humbling to experience more "failure" this time around.  The weather conditions were tougher this spring (if you can even call it that) than last year.  They were more reminiscent of 2011, when I PRed, didn't care about splits, and just got the miles done.  The weather was so nutty and all my long runs were done outside that there was nothing that I wasn't prepared for.  I sort of feel like that right now.  Hopefully I did enough character building in this training cycle to be properly prepared.  I feel like I could have gotten a bit more hill work in, and I either had an insane amount of wind or I was inside.  I didn't get much outdoor running with just "normal" wind.

My right foot is bothering me a little, but the taper has only been an improvement.  I'm pretty sure it will be fine on race day.  I want this so bad that I know it will be fine on race day.  It might be really not fine the next day, but I will worry about that later.  I'm icing as much as I can and wearing sturdier shoes to work for more support.  Although, this week has been a bit of a test.  Last Thursday, my long run day which is always the worst day of the week coincidentally, Keira was throwing up.  That resolved itself on it own thankfully, and I switched days of my plan around so that I did a short run while Ryan was at work, and then moved my long run to Saturday.  I also did some yard work and got a splinter!  Ugh!  A thorn, right into my finger.  It didn't come out until Monday night.  Then yesterday, Keira came home from school with Strep.  I typically take Wednesdays off and go into work, so I had to find someone to cover for me and then I've spent all day doing laundry and keeping the kids separate, and disinfecting things.  Keira is only contagious another few hours, but any of us could get sick in the next 1-4 days (it takes 2-5 days from exposure to infection).  As much as I gripe about our pediatrician's office not being as nice as the office in MI, they sure have been very accommodating.  Keira came off the bus yesterday at 2:30, burst into tears and crashed instantly on the couch with a headache.  I knew strep was going around and that this was NOT normal behavior.  With taper madness in full force, I called her Dr's office (my 6th time contacting a health professional this week since I'm going taper crazy), and they got us an appointment for 4:45.  By 6pm, we were home from the pharmacy and already had her first dose.  And we got $6 worth of candy from CVS for only $.53 thanks to extra care bucks.  Score!  Now we just have to hope no one else gets sick!

In addition to the training preparations, I am also starting my piles of things to pack.  My welcome kit arrived, and my mom bought my jacket already for me as a birthday present.  I still need to earn it, but its there, waiting. 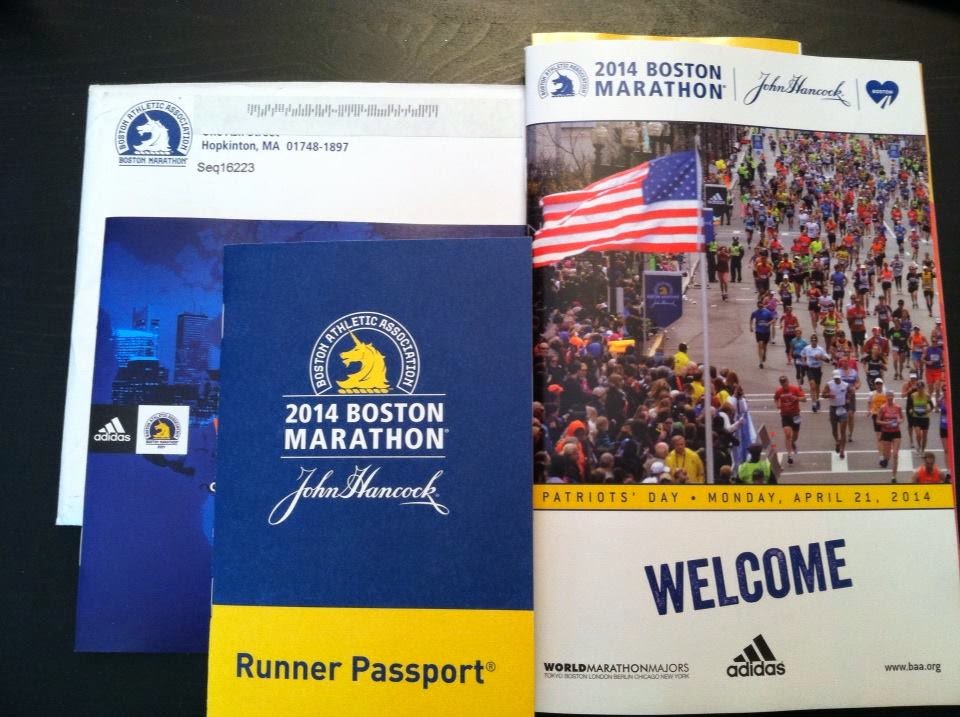 I have been amazed by the support of my friends, family, and even strangers.  This week, a package arrived from Strava, after I filled out a survey for them stating I was going to Boston.  It was funny, because right after I filled out all the info and hit submit I thought, "either this is awesome that I am getting something cool for free from Strava or this is the most brilliant scam ever to get my info".  Thankfully it was the former, and I really didn't provide any information that wasn't already public record that anyone could access by asking at the county clerk's office or searching the internet.  They sent me a card that says good luck on the back, gloves, tattoos, and a wristband.  I love wristbands.  Last time I ran Boston, I turned my leg orange with a plastic bag.  I need to wash the wristband so that I don't turn my sleeve or arm orange!  Ryan reminded me of that. 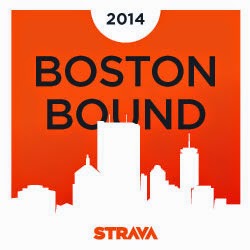 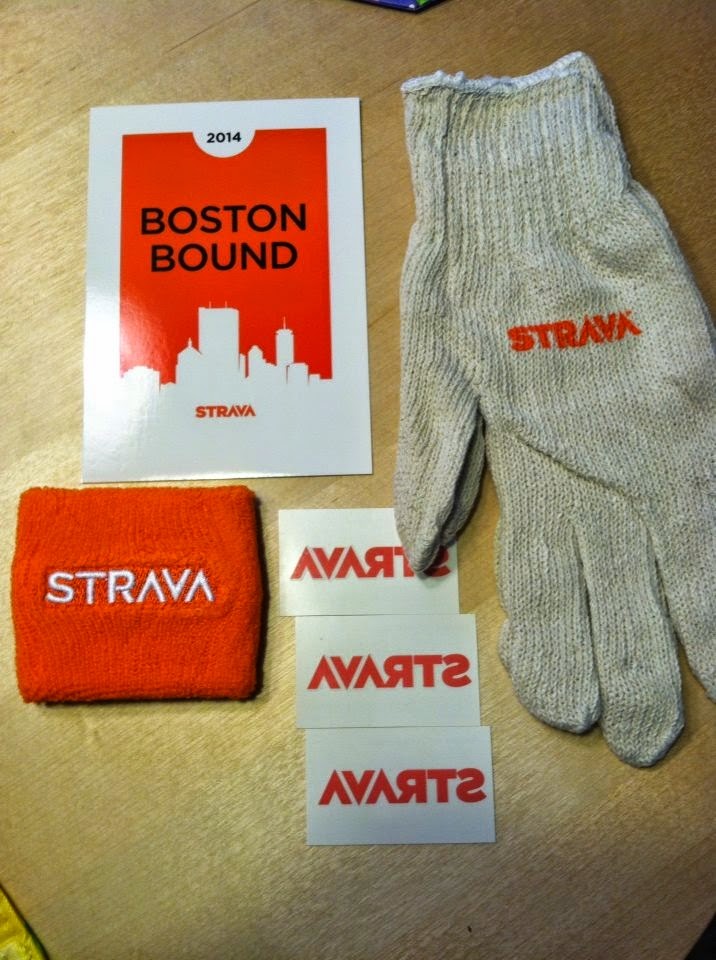 I have my visor from Kebby to wear.  So pumped about this, and I got a custom bib from Races2Remember today with my name on it to wear with my race bib.  The rules state that you cannot modify your bib at all, and this will look so much better.  I might have to order more of them for races where I can't get my name on the bibs because they look so nice and are really reasonable. I'm not going to post it until I figure out how/wear I want to wear it 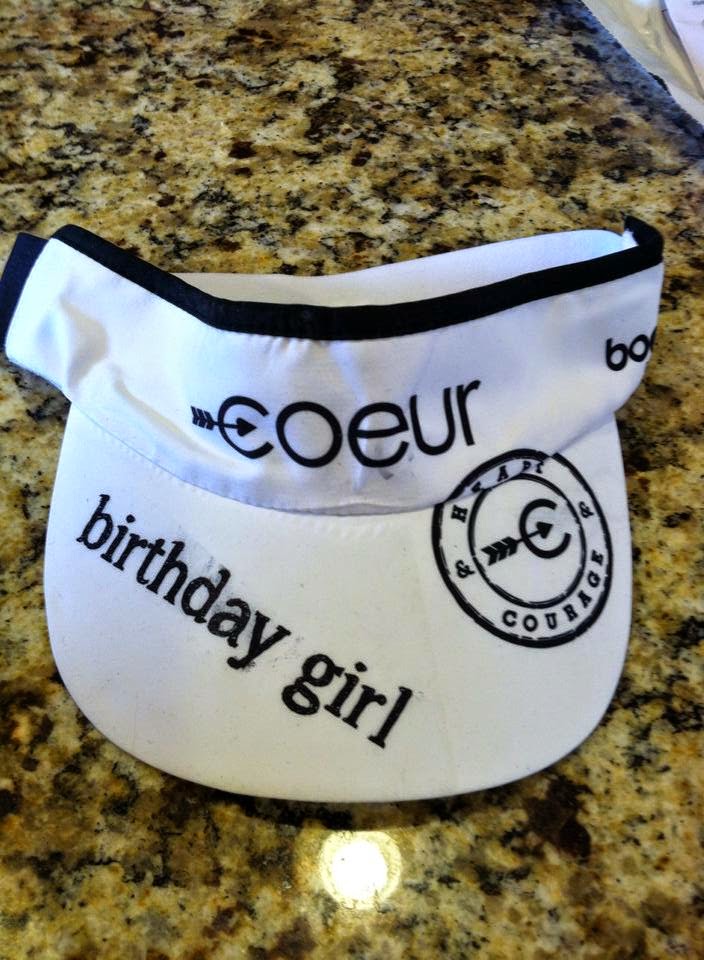 The tricky thing about the race is that they aren't allowing any baggage check in Hopkinton.  Anything that you bring on the bus you either need to donate, consume, throw away, or carry to the finish line.  They also said no bags.  Hopefully ziplocks are ok, because I want to use chomps for this race, and they are difficult to open.  I want my food in ziplocks, and I can put those in my pockets.  I have a warm up suit that I have never worn that's been in my closet for ages, and I think I will donate it in Boston.  I was planning to donate it anyway.  I also pulled several tees out of my old shirt bin and will likely take an extra tee with me for an additional layer.  I have a heat blanket to bring, and I need to decide if I want to use my bolero or arm sleeves when I get there.  The nice thing about wearing a tri top is that I should have sufficient pocket space to store my sleeves or bolero should I need to take them off.  The only tricky part is taking it off with my garmin since both my sleeves and bolero have hand mitts attached.  I'm planning to run with my phone in my spibelt like I usually do, so I can easily find friends in the athlete village as well as after the race.  When I raced in 2012, I checked my phone at the start of the race and got it back after the finish, and carried a camera.  Hopefully I will get some decent pictures with my iphone so I don't need a camera AND phone.  That's just too much stuff to carry!

I'm really excited to go to the race.  While I wasn't there last year, I was still affected because I WANTED to be there last year.  I had friends there, and it was such a swing of emotions for me because I went from being sad that I wasn't there to horrified by what had happened, and then gratitude for being home.  I am not afraid to race this year, and I am excited for this to be a celebration of life and that terrorists do not win or stop me from doing what I love, and that is to run.  I also cannot believe that I am competing in an even that will be televised nationally!  Really, how often does that happen?  Its not just that its on TV, its that its a big enough deal to be on TV!   Fleet Feet of Louisville is doing a send off on Monday for runners and their supporters that I am hoping to attend.  I need to make sure I can get Soren to soccer practice, but right now that is the only issue.  I'm excited to see who else from the area is going.  My neighbor, Ande, is going.  How wild is it that I had a neighbor Jen to do Ironman with me and now I have a new neighbor, Ande, to run Boston with me!  Best neighborhood we could pick!  Since we are both traveling with our families and friends separately, I hope we will meet up out there.  There are so many more runners than Ironman and with the different bus loading and start times, its going to be tricky, but hopefully we can meet up out there.  Cristina has already told me she would wait for me at the finish area. Hopefully she doesn't wait too terribly long!  She's starting ahead of me (as is Ande) so she'll have a decent wait.  My Coeur Sports teammate Emily will start early too, and I hope to meet up with her.  Anita will be there too.  I followed her in Detroit half when we were both trying to get into NYC.

I'm not sure if I will do a post after the send off Monday or not.  Obviously, if it doesn't work out for me to go then I won't post about it, but I also don't know if I will have time.  In the meantime, I leave you with this picture of the medal: 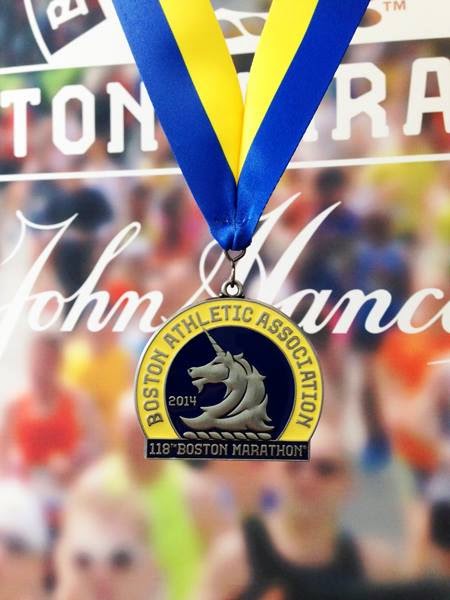 Posted by Unknown at 2:16 PM No comments: