I have been very behind on blogging.  I think that is the way all these posts are starting lately.  I have been trying to figure out why.  I think life is just in the way.  I don't have any kids that nap anymore, and Ryan works so late into the evenings, that I really don't want to take the time out of "our" time to be sitting at the computer and I have been enjoying some of the TV shows with him, as well as working on the disaster that happens in our house on a daily basis with the two kids' activities.  With Soren in preschool, I have been able to go to Keira's school more often without the painful process of asking people for favors with Soren, and I can go to Soren's school whenever I want, because his school is entirely contained within Keira's school.  As a result, I feel like I am being a better mom, and trying to be a better housewife/homemaker (although our house is still a wreck most of the time and a lot of the time I still feel distracted after the kids are in bed by things that I have put off because I can't handle them with the kids running around.  I have 3 events that I need to catch up on.  I will try to give them each a decent amount of review, but will try to be concise.  I am already starting to forget details, so that should help shorten things up.

Brooksie Way Half Marathon:
I won an entry to this race from Kelly at Secrets of a Running Mom.  It was from Renewal by Andersen.  She was supposed to race too, but due to her pregnancy, was unable.  I had been looking forward to meeting her.  The race was held the day after Soren's birthday, and we had a party for him on Saturday.  Basically, I ate at ton of junk food, but we had a great time.  My friend Chad was able to pick up my packet for me to save me from the 2 hour plus round trip drive it would take to go to the expo, and that was huge so that I could enjoy Soren's birthday.

Race morning, I got up and went to the Renewal by Andersen Booth to pick up my green shirt.  I should have taken a picture of the back, but it is a fun shirt.  I wished they would have had my size right, but oh well, it was a free race, so I can't really complain.  It said, "Like my Shirt, after the race, I'll let you see the front" on the back.  Then I found Chad with my bib.  It was nice to have the booth to leave things in and it made it easy for us to find each other. 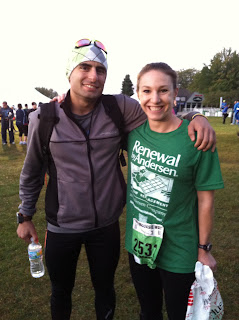 We had a group picture next.  These are from my brand new iphone, and unfortunately, it isn't the best at taking photos in the low light of sunrise.  I should have busted out my regular small "race cam" camera, but now I know.  That is Jeff from Detroit Runner that is pictured with me, as well as Kelly's replacement. 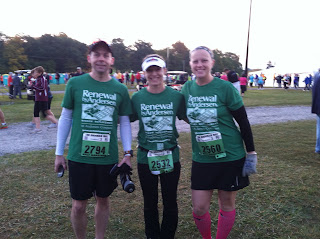 I ran into teammate Brandy in the port o pottie line.  I couldn't count this race for Aquaphor, since I ran it for Renewal, but I am glad we had the photo op.  The lady in in the right of the photo has on the race shirt.  Both years I have done it, they have been very bright for better visability during those fall runs when the daylight hours are waning. 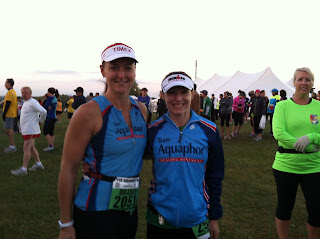 The Brooksie Way has a unique profile, in that it is downhill for about the first 5 miles, and then uphill with some rollers for the remainer of the race.  The last 3 miles aren't as bad as those middle 5, though.  I started out with the 1:40 pace group, and got a little ahead of them at times, but eventually they caught me on the second half of the race.  It was no PR, and I didn't think it would be, but I did run it faster than I did in 2010, so that was a plus.  I was 1:41:53, watching the clock click over to 1:42 as I crossed.  I was just super happy to be under 1:42, especially on this course, which is hard, I think.  I also had someone ask me about my shirt during the race.  It is always nice to have people notice your sponsors and ask you about them.

The medals were SUPER COOL for this race.  I remembered when I did it in 2010, that it was a nice medal.  It had some thickness to it, and was by far my coolest half marathon medal because I love fall, and it had fall leaves on the ribbon.  It was one of my first medals with a really fancy ribbon, and I thought it was so cool.  Well, this year, for the 5th anniversary of the race, they had the leaves in a stained glass style on the medal itself.  The ribbon was less fancy, but had the race name on it printed large.  Since it is a half marathon and 5K, it said "half marathon" on it, unlike some of the other races I have done where the all the ribbons are the same.  I think it is a little lame to have a medal that says half and a ribbon that just says "marathon", but that is just me.  It was like that for Air Force and Derby.  Detroit last year didn't have any words on it, just the distance.  Jeff took a bunch of pictures of his medal too.  Even though there is glare, this is my favorite since our tree is yellow in the background. 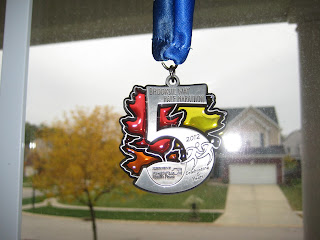 Anyway, I was really pleased with this race.  I was 9th in my age group, and as it turned out, Leah from Chasing Atlanta won (and she in my AG too since we are the same age, so I guess I was technically 10th, but she was taken out of the AG awards).  I am glad I did it, and we had a great time for Soren's birthday.  I felt really awful, though, when I finished because it is not a good idea to carbo load on apple cider and donuts the night before the race.  My stomach was fine during the race.  It didn't bother me at all, but as soon as I was done, it revolted, and it took me a little while to feel OK enough to make the hour drive back.
Posted by Unknown at 1:08 PM 2 comments: