This is my attempt to catch up on my race recaps.  Since this is a 5K, it will be pretty brief.

This was a last minute race for me.  It is the first in a 4 part series.  When I signed up for it, I wasn't sure if I wanted to do the whole series or not, so the plan was to just sign up for them one at a time.  However, the races all seem to fit into my existing schedule, so in the meantime, I have finished the 2nd and sign up for the 3rd already.

Ryan was scheduled to go on an overnight camping trip the night before with Soren, and was likely not going to be back in time for the race start.  The tentative plan was for me to run with Keira in the single jogging stroller.  However, we had a thunderstorm watch for the night of the campout, and it was cancelled.  I was able to go to this race by myself.  Since it was at Crestwood Baptist, it is about .25 miles from my house, and I run by it every time I run outside.  Soren goes to preschool there, so it was good to support them too, even though it is not the church I attend.  It was cool that I was able to walk there.  Our neighbor (and Bishop of my church), Todd, was going to do it, as well as two other friends from my church, Francine and Kate.  This was Kate's first race, and Francine's first in a long time.

Running this close to home was great because I was super familiar with running here.  I did know that it was going to be hilly because it was on the bypass.   I'm so glad that I didn't have to push Keira in the stroller, but it was nice to have a good sprint workout.  After talking with friends from MI who are very fast, they encouraged me to do more 5Ks to work on my speed.  Also, how could I pass up a run this close to home?  I think I was the second female, and first in my age group.  I was super close to passing Todd at the end, but he held me off when we both sprinted to the finish. 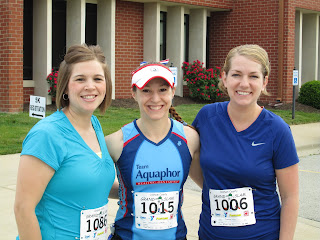 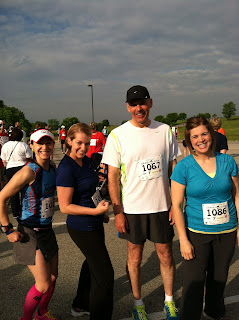 Me, Francine, Todd, and Kate 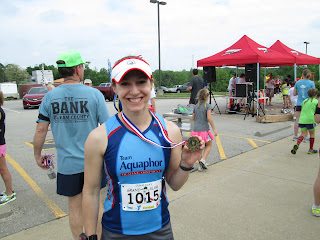 Me and my first place AG award! 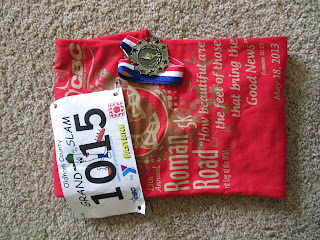 Tee shirt, medal, and number.  Ironically, I missed the Detroit Race for the Cure, and my friend Roman's wife had a huge team called Amy's Army.  I was able to make a donation to her team, but I thought it was cool that my shirt called this race the "Roman Road 5K".  It didn't say that on the entry blank, so I didn't know it until I got there.

With Horsey Hundred the next weekend, I did have to ride after this.  So much riding!  I had gotten my really long ride out of the way on Thursday while Soren was at Francine's.  The weather forecast wasn't great, but I went out anyway.  I was able to get in over 50 miles before I arrived at the Loft in Sligo.  The storm was coming, so I opted to bail at that point.  Of course it was the furthest point from my house, but at least it was a safe place to stop and wait for a ride.  I have taken shelter here many times!!! I had to finish up on the trainer, but got in about 74 miles once it was all said and done.
Posted by Unknown at 9:21 AM No comments: