This report is really late (as usual).  It will be brief (for me) since I already have another race recap due as well.

For background, I had received a flyer for this race from the Indianapolis Monumental Marathon race packet last Nov and was intrigued.  Even though my first marathon was in Ohio, and most of my races are either in MI, OH, IN, or KY, I still had yet to do a half marathon in Ohio.  The half dates that I usually were interested in doing were too close or the same day as other events.  I brought Soren with me to the Derby Expo this past April, and he fell in LOVE with the medals from the the Air Force Marathon because they had an airplane on them.  An officer was there at the booth providing information.  I talked with him, and noticed that the half was already at 80% or so capacity.  I checked the dates, and it seemed to be a good fit.  It was super flat, and could be an awesome opportunity for a PR.  I could use it as a training run for a fall marathon or something like that.  This was before the IM plans had been laid out.  My mind hadn't switched to tri season yet, since I was still less than 2 weeks out from Boston.  It was also very close to Soren's birthday, and I thought it might be nice to do the free Air Force Museum for his birthday, and avoid a stressful birthday party with a bunch of other 4 year olds.  I talked to Ryan about it, and then learned that Kim from (Just) Trying is Little Girls would be running too.  Awesome.  I signed up, and then put this race out of my mind.  I knew I would be training for a half ironman at a minimum, which involves running 13.1, so training for this would be just part of what I would normally be doing.

Then Ironman happened, and I wasn't even sure if I would be able to race this race at all.  It was 3 weeks post IM, so I thought that would be enough time to recover, but honestly, I had no idea.  It would be one of those have no expectations have fun events.  The closer it got, the more excited I got about doing a new race in a new state, and seeing some new people.  There were several team Aquaphor people running it, and since it is only about an hour or so from where I went to school, I started hearing about more and more people I knew that were either going or spectating.  In fact, when I went to check my bib number, I learned a lady from my tiny city here in KY would be going, too!  I looked her up on fb (I am such a creepy stalker, aren't I???), and we had some common friends.  Turns out she goes to church at my building, but just at a different time since she lives on the other side of town (it amazes me that my city here is so small, and we have 3 different congregations, whereas in Detroit, my congregation comprised of 3 cities).

I was all set to have a great time at this race.  I had arranged for my parents to come out too, and they agreed to give me a ride to the race start, since the race day logistics were a bit tricky.  I needed to be there far in advance, due to there only being 3 entrances to the base.  My parents had wanted to be there early because there neighbor was doing the wheeler marathon, and the marathon started an hour ahead of the half.   It took a long time to get to the start from the parking area.  They were not kidding that you needed to be there an hour to 1.5 hours before  your race start!  We had just passed through security for the B2 fly-over that marked the start of the race. 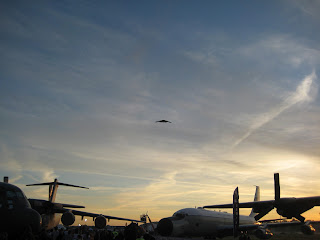 Then, I had an hour to wait.  I was able to meet up with Jess and Kim.  I love Jess's awesome patriotic outfit for today.  Kim's was patriotic too, but it was covered up waiting for the start. 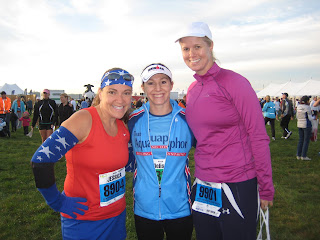 As well as Lisa from Team Aquaphor. 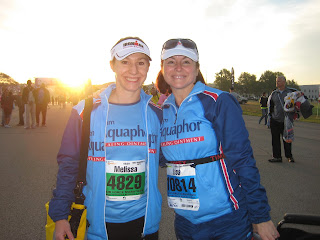 Even though it was a big race, the start area seemed really low key.  There wasn't anything dividing people into corrals aside from the signs on the sides marking paces, but those were very well marked.  They didn't seem to care who was in the start area either, and people were milling about in the area as soon as the marathoners were off.  I had filled out the application for a seeded bib, and I received one, because I could run faster than a 1:50.  That is not super fast, so I expected there to be a lot of us.  I had a green bib marked "Elite".  I felt so special when I picked it up. 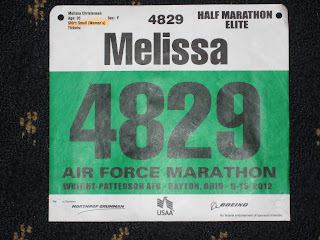 Apparently, not very many people applied, because I then felt like a DORK when I was asked to move up to the FRONT and stand on the actual starting line!  What?  I kept looking for more green bib people to step up, and there were only a handful of us.  Seriously?  This was sort of embarassing, because I knew that I could not go out super fast else I would crash and burn.  I hated that I would be passed immediately, and was going to be one of "those people" who lines up way to far ahead of where they should be.  Oh well, at least I got some cool pictures of me at the front.  I could still feel cool for a little bit, right? See, there are only like 4 people with green bibs! And this was a HUGE race!!!! 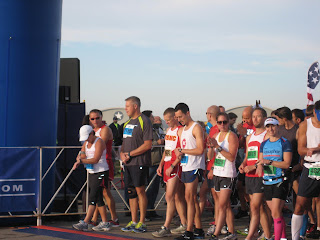 The race started and it was a perfect day.  I was getting passed left and right until I settled into my pace.  I was going great and hit mile 4 in PR pace.  I hit mile 5 (on my watch, no mile marker) Then something odd happened.  I was running along and out of nowhere comes a group of half marathoners that merged in with my group.  Hmm, looks like they were lost, I thought.  Good thing it wasn't me.  Ha ha, that would come back to bite me because at mile 5.75, I was told that I would need to turn around.  Wait, what?  Don't I have another .75 to go before I need to turn around at the halfway point?  What?  Its a loop, not an out and back?  Huh?  I was in denial that I was going the wrong way, and asked an officer on the course what the heck was going on.  He told me I needed to turn around.  Seriously?  I slowed down a bit because now here I was with the 9:30 pace group of people that did not get lost and were going the right way the whole time. What?  I had no idea how much farther I had to go, and since I haven't been anywhere near PR pace for an entire half marathon, I knew I had to slow down to be able to do more, and a PR was out of the question.  I asked around a bit trying to figure out how far we had already gone, and no one knew or had gone the same as me.  When we hit the course mile marker 5, 48 minutes had passed, and my garmin already said 6.5 miles.  An extra 1.5 was what I would need to do.  Fine, whatever, it would be a tempo run.  This was just a fun race anyway, right?  The really upsetting thing was that the guy behind me started to freak out about being able to run 14.6.  I felt really bad for those people going in under trained or as their first race.  I joked with some people that I was getting my miles back from Muncie that had been cut short.  No one except me was in a joking mood, though.  I just thought it was very funny, that yet another one of my races that had been planned for a long time had gone sour.  First Boston was a billion degrees and we were advised to start slow just to be able to finish (before the heat kicked in and slowed everything down), and Muncie was cut short by a lot.  Now this was made long.  Oh well, at least it was a beautiful day to be out running.  It was just so strange because there were people at all the intersection.  I started doing calculations, and decided that as long as I came in under 2 hours, that would be good.  My pace bounced around a bit.  I got passed by a friend from KY and then got all competitive at the end and paced her back in a mile or so.  I also made a bunch of people mad around me when my Garmin clicked over to 13.1 (at 11.6 on the race course), and I threw up my arms and cheered for myself, 13.1,"Woo hoo!  I'm done, wait, I still have 1.5 miles to go".  I really thought I was going to get punched in the throat at this point.  No one else thought it was funny.  See, the way my year has gone, this is just more of the same, and I learned to roll with it.  I finished in 1:55:56 something, and had an average of 7:56.  Not too shabby, considering I slowed down a bit when I realized I was lost and then switched to a tempo run to conserve myself since this is the first of three fall half marathons for me.  I felt great at the finish line. 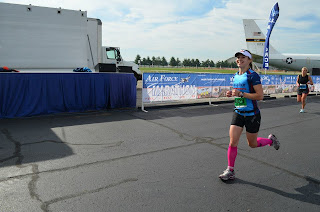 I met my parents' neighbor Bruce, who won the handcycle division of the marathon, setting a course record. 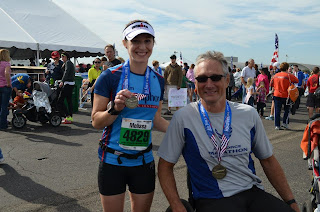 I also met Jascia from Team Aquaphor after. 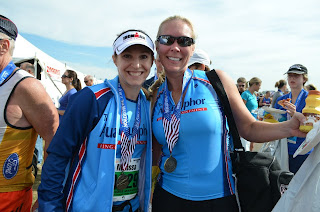 I did some sampling, and then we spent the rest of the morning/afternoon visiting the museum.  Ryan and Soren were super excited about it.  It was cute to see them so stoked.  I enjoyed it as well, and so did Keira and my parents, but we weren't nearly as thrilled as the boys.  We took a zillion pictures of the planes.  One of the funniest parts was that we came to a display case of models, and Soren thought it was the gift shop.  He was destroyed when we told him he couldn't have one of those!  He did get a mini SR-71 Blackbird to take home, though. 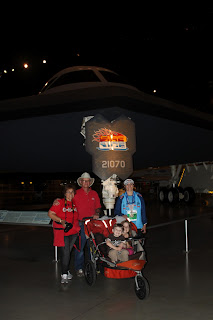 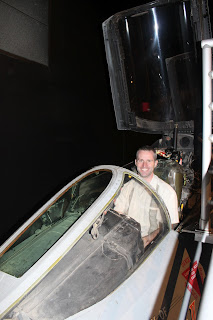 It was fun.  Will I do it again?  Probably not, because it was a bit of a drive and required a hotel, but I would recommend the race to others.  A lot of people were upset about the problem with the course, and from the feedback they received, I am sure they will make sure this doesn't happen again.  Perhaps they will draw a line on the ground like they do at Akron and some of the other races for people to follow so there is not so much reliance on volunteers and such.  It was a cool race.  Bummer that I got lost, but it made it memorable for sure.  I'm just glad I had 2 more half marathons to do this year and that is wasn't a big deal for me.  For some people, I am sure it was.  I feel bad for people that didn't have other races or that had planned this for their first half ever.  That would be un-nerving for sure.  I never got upset over it, because I have really learned to roll with it this year.
Posted by Unknown at 5:46 PM 3 comments: