This week was a really excited week for me.  I had entered into a LOT of contests.  I feel like I win a lot of contests, but that is merely because if there is a contest that I am remotely interested in winning.  There are tons that I don't win.  I had two contests ending on Monday, one was a choice between a couple bikes or wheels, a retail value of approximately $2500, and only had about 100 entrants.  Ryan and I each had a ticket.  The other was from Renewal by Andersen, and was for two race entries into the Kona Running Co triple crown in MI.  This one would be tougher for me to use, but I had a friend who was also entered, and figured I would give it to her if I won.  Additionally, I found a contest from Run with Jess, for fit couples.  I didn't win this one either, but she made up a darling card: 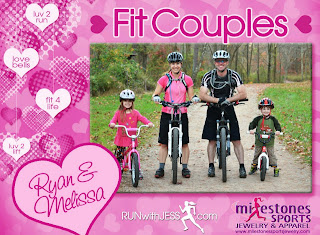 Also, I found this card in the box that Soren selected from Target to give out to his classmates.  It was from the Thor valentines, which contained 4 different Avengers. 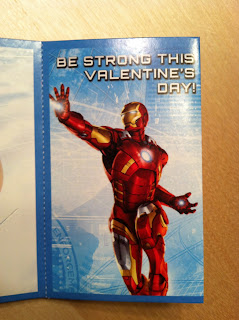 And finally, I had applied for a sponsorship with SOAS, and didn't get it.  I really wanted it.  I knew I wasn't up to the same level as the ladies they sponsored last year, but they were also a pretty small company, so I wasn't sure how many people would actually apply.  The application was extremely time consuming too, so I really felt like I had a decent shot.  I spent the majority of yesterday facebook and twitter stalking them.  I finally learned around noon EST that they would post the team at 2pm PST.  5pm EST, right?  Well, I spent from 5pm-6:05pm EST refreshing their fb page.  The post didn't show up until 6:03 EST, and I wasn't on it.  I was bummed, to say the least, but not overly shocked.  I don't have one of their kits, which I am sure hurt my chances, in addition to the fact that I am not nearly as talented as the other ladies they picked. There is always my birthday.  This is the kit I want:
http://shop.soasracing.com/apparel/pink-peacock-tri-kit/

On another note, I finally had a really successful difficult tempo run.  These had been driving me nuts lately.  They were all at paces that I have been able to race at distances longer than what I was supposed to be doing for my tempos, but I have only really nailed one of them.  Until today, and I did a hard one on the treadmill.  I just set that sucker at goal pace and just did it.  It was hard, but I didn't puke or fall off, so it was all good.  I am sure it helped that there wasn't any wind or hills too.  How do you do your tempo runs?

So, from the title of this, hopefully you have figured out that I am now on Twitter!  Yay!  Wait, what?  I really don't fully get twitter.  I have posted a few things there that I haven't posted on fb, just because I figure if I get too annoying, people can just unfollow me.  So far, most of my "tweets" have been either running or children's related.  My kids have been really excited that I am following PBSKids so that I am keeping up on when their shows have new episodes.  We are up to 47 Wild Kratt episodes on the DVR, plus the movie (which I was able to tweet about already, one of my first tweets).

Can you suggest anyone for me to follow?  I really don't know what I am doing.  In fact, I think it is really funny that my only tweet that has gotten ANY response was when I tagged Gymboree, thanking them for fixing a problem with a coupon that I had.  It was CRAZY, because of all the people that I actually know that follow me, a huge company that usually takes a few days to respond to fb posts responded right away.  Now I am thinking twitter is the way to go for dealing with them, if I can't get through to customer service.

Here is my twitter "handle"  Sorry for all the random letters.  It is supposed to be an acronym for Double Jogger Diaries, but I had to add extra letters for my initials too.

So, please follow me!  If you do, and I don't follow you back within a couple days, leave me a comment here with your id in case I am confused who you are.  My brother's twitter content is night and day different than his f/b, you would hardly know they belong to the same person!
Posted by Unknown at 2:05 PM 1 comment:

This week I completed the Sandy Hook Memorial 5K and Half Marathon on January 31st.  The shooting there affected me so much.  I cried for days.  My daughter is a first grader, and because I know this age so well, it was so real to me.  I was devastated by this.  When I saw that the event coincided with my first 20 mile run of the Run Less Run Faster plan, I knew I HAD to do it.  I would run one mile for each of those children (I did another run in Dec that my tri told me about that I dedicated to the adults). 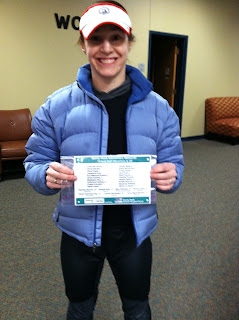 I registered too late for a medal, but that was OK.  This way, more of my entry fee went to the victims' families.  I did get a bib that I printed myself. It was a miserable day for a run, though.  I was really glad I had this virtual run to focus on.  It was really cold and windy.  I am used to the cold from MI, but with the routes that I do here in KY, the wind can just be relentless because it is just so much more exposed, and instead of being a loop in a park, with public bathrooms that I could stop and get more water and use to warm up, it was just going to be me and 20 miles, outside for around 3 hours without stopping or going in.  The real feel was in the teens, but I dressed apporpriately (GOR windstopper tights by Mountain Hardware, fleece hooded top, windbreaker, winter mountain biking gloves, CEP socks, GOR windstopper headband, and visor). I also brought some things to pump me up: Flat Cristina paper doll (made by Keira), We Love Amy wristband, my race bib, and I chose my Boston visor since it is Keira's favorite and has a unicorn on it (for unicorn special powers).  I brought hot water in my camelback so it wouldn't freeze, but also my credit cards in case I had to stop somewhere (gas station, CVS, or McDonalds) to buy more water.  I was really glad starbuck was the opposite direction I run, otherwise I would have likely ordered a hot chocolate and stayed a while. 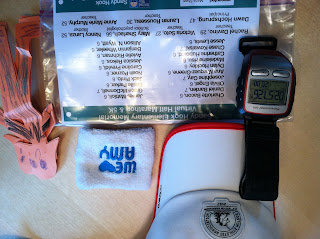 (I don't know why this picture is upside-down, it looked fine before I tried to upload it)
My goal pace was 9:00min/mi, and I was pretty sure I could meet this on regular day, but my first half mile was straight into the wind, and so difficult!  This was going to be a long run for sure!  Due to the conditions, I had intially planned that I would run my 10 mile out and back, but twice.  The wind was driving me crazy, though, and I decided that I couldn't take the miles back to my house on the bypass twice, so I opted to run into Pewee Valley instead of running home, until I got to 10 miles, and then turn around and repeat the whole thing from there.  That turned out to be a good choice.  I got to avoid some windy hills, and get some break from the hills.  The last 5 miles were super hard, though.  I did come in just under 3 hours and on pace.  Whew.  I am glad that I had the motivation of the virtual run to get me through.  I just kept thinking that each one of those little angels needed a mile.  I had to give them each one.  I got home and just cried and cried.

Doing my long runs on Thursdays had presented some interesting challenges.  I didn't have much time before I had to get Soren from school.  I had to take a quick shower, and get over to school.  I didn't have much time for cool down or eating.  It made the day be really long, but it was nice to get it done during the week.  I only had a short run scheduled for Saturday.  It allowed us to go skiing in IN for the afternoon.  We had snow coming all weekend, and it was a short drive away.  It wasn't a huge resort, but it worked great for the kiddos.  The staff there was super helpful to us.  They were great helping the kids on and off the lifts.  However, it was total amatuer night there (lots of skiers in jeans and full on camo gear).  We saw some crazy falls and people struggling with the lifts.  Kind of scary.  You can imagine my astonishment when I actually saw a kid land a backflip in the terrain park on skis!  Awesome!  I have never seen that in person before (only on TV), even in Utah!  I guess when it isn't that steep,  you have to work the terrain park if you are a local.  Keira is doing great on skis.  We were just happy for the opportunity to get the kids outside and skiing, even if it wasn't challenging for us.  We had a blast, and that was what was important. 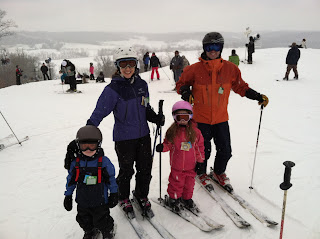