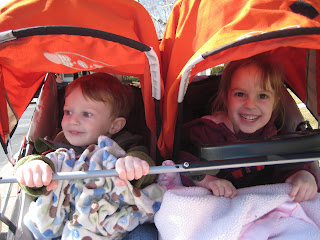 I was able to run outside today with the kids in the jogger! Yea! Finally, since I have started this site, I am able to write about running with the kids in the stroller. Since Wednesdays are usually my run for time day at the gym, and I had to skip that class today due to volunteering at Keira's school, I was happy to be able to just run the "usual" neighborhood loop. When Keira and Soren asked what we were doing today, I told them a stroller ride. It was met with mixed reviews. Soren was excited, Keira was not. We had been discussing McD's drive thru as a possibility, so I told Keira that if there was no run, there would be no McD's. This was risky, because rule #1 of running in the stroller is that everyone needs to be either fed first or eating in the stroller, because hungry kiddos make for big complainers. I got them their food on the way home, including a Shamrock Shake for me. Yum, my once annual treat, and since today was "Green Day" at school since Keira doesn't go on Thursdays, we celebrated St Patrick's day today, essentially. So, I have now eaten a shamrock shake, a few bites of apples, and 2 McNuggets (Soren was working on his version of Jack Black's McSurf and Turf Delux, eating half a cheeseburger and half a carton of nuggets, while I am doing my best to resist the double filet o fish sandwiches. I have not had one yet this year). Usually I just eat the apples and the diet coke from one meal, and the kids split the fries and chocolate milk from the other, and I make a salad at home. Soren at the apples today, though, and only gave me two, so I ate two of the nuggets since Keira just eats the fries. This is such the lunch of champions (NOT!!) Today is going to be a calories in less than calories out day, which means when I eat junk like that, I just have to cut other calories elsewhere. I usually don't gain weight that way, I just feel cruddy.

Back to the running. We were all fed (?) and I loaded everyone up with their blankets and toys. Wouldn't you know it but as soon as I turned on my Garmin the battery died? Seriously. We had an issue last night setting up my new bike because we couldn't find the tire circumference anywhere for my 650x25 tires, and it sat on for a while not being used. Eventually, we just measured it with a tape measure for last night, but we can let it calculate it once I get outdoors. I am not sure if the stiff, slippery, metal English tape measure I used and converted to metric is more or less accurate than Garmin's satellites or not. Of course I was trying to get data from it for my Cupcake Marathon, but I only needed 1.2 miles of data, and I know my loop, so I just timed it with my Timex. If I have to make it up next week, whatever. We did our 3.4 miles in 27:50. I must say I was very pleased with this time, especially since it was a bit windy and I had eaten the most stellar meal prior to it. This is way better than last year, but I was trying to run fast instead of leisurely, since this is a race and all, and I was technically shorting myself 1.6 miles from the plan. I had always justified that being OK with my cross training, but I didn't do that today. 5 seemed too long for the kids' first time out, and it would require an additional loop of the lake. I am going with 9:49 for my 1.2 for the Cupcake Marathon, based on my average pace for the run. Hopefully I won't have to take a picture of my car odometer, but I can find a run just like it (just not as fast) from last year with the same distance. 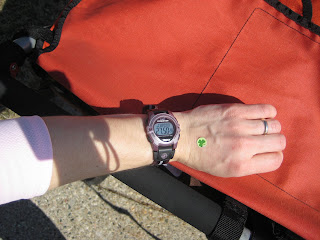 Tomorrow has 8 miles on the schedule. I am torn. That is quite a long time to have the kids in the stroller as their second ride of the year. I feel like they need to be "broken in" gradually, and build up to an 8 mile run. Also, there isn't a good 8 mile course that I can do here without looping, which makes the kids nuts. They can't stand repeating mileage, and they know where "home" is, so when I go around again, they go crazy. I could drive them out to Kensington, but that would be pretty hilly and also we can't go swimming afterwards (which was always the reward last summer for going all the way around). Island Lake is a possibility, because we can run out 4 and turn around, but there is no playground for reward. So, it may be that I run indoors tomorrow, with my tunes and my childcare included with the gym membership, and a shower afterwards. Decisions, decisions!
Posted by Unknown at 1:08 PM

Yumm, shamrock shake. Haven't had one in years! I have been getting a McDonald's Oatmeal and D Coke after workouts lately since I usually have some errands to run before going home. There is a McDonalds very near the Gym and it is more satisfying then some kind of a bar and beats getting the OMG I am going to KILL someone hunger that happens if I don't eat soon enough after a workout. :-)