This race was one of the deciding factors for me on whether or not I would do the series.  It was an evening race, and I really wasn't sure if I would be able to do it, due to an appointment earlier in the day.   Thankfully, things worked out and I was able to make it.  Also, my new Team Aquaphor singlet arrived the day before.  I had selected a run kit as my selection this year, and the top was way to big, so I sent it back.

It was a billion degrees at the start of this race.  Well, not really, but it was 94, since it was a Friday evening race.  It was great that it didn't mess up a ride for Ryan on Saturday.  When I signed up, I realized that Soren's soccer coach and director of the soccer program were two of the people in charge.  Soren is not a fabulous soccer player.  If you can picture a skinny tiny version of Jack Black (or maybe even Kung Fu Panda) playing soccer, he might resemble Soren.  It is a little frustrating to Ryan and I that he plays around so much on the field, so you can probably get how excited I was to show the soccer folks that I did have some amount of athletic ability.  I was even more motivated to do well today.

I had two of my tri friends come out for this race.  Julie, who was turning 50 the next day, and Terri, who was racing as part of her work's team.  Julie is hoping to go to Kona, and Terri did Ironman with me last year.  It was great to see them and not be alone at this race.  Our bishop had to go out of town unexpectedly, so he wasn't using his entry, and no one else from church had signed up either. 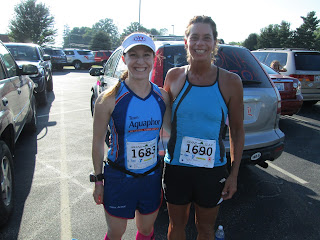 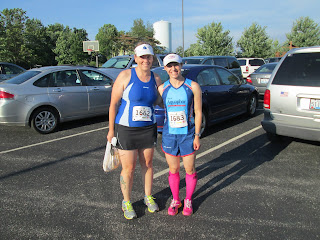 This was a tough course.  All of these OC races seem to be.  We ran downhill for a bit, flat for the middle, and then uphill at the end.  I had horribly ascending splits.  Oh well.  It was good enough for 3rd Female overall, which received an award, and 1st in my AG (which I was not awarded due to having the overall award).  Julie also won her AG too! (sorry for the blurry iphone picture). 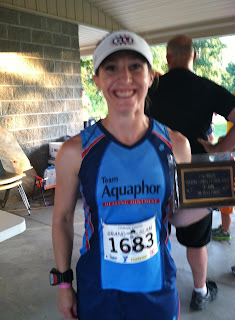 It is funny how Oldham County seems to be biased towards runners.  I got my picture in the paper after my first race in the series, in color and everything!  Yet when I did the Ironman last year, no mention.  There is a lot of contention between the residents of OC and the triathlete/cyclist community.  Yet they seem to LOVE their runners!  The course of this race had us running from a church off of 146 and a side road, over to Commerce Parkway, up 53 to Main and to the finish.  They had one lane of 53 closed for us, PLUS Main street!  WOW!  You will get hit at the intersection of 146 and 53 on your bike if more than one bike tries to go through the 4 way stop at the same time, so it felt pretty nice to be running up that street with a whole lane.  People actually came out and were cheering for us!
Here is the picture from the newpaper for the first race: 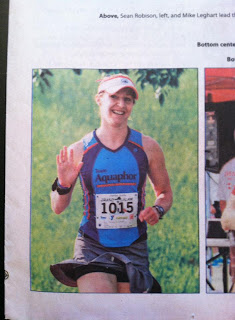 Also, I am in second place for the series after this race.  I felt like I wasn't quite as far behind the first place woman in the series (she was second OA at this race, and the winner skipped the first race), so maybe I have a shot at the series?  I don't know.  I am about 90 seconds back.  That is a lot for a 5K.  I am not sure who else is in contention for the series either.  With these races not chip timed, results aren't readily available.  Since the OC does love its runners so much, I will be able to get them from the newspaper, and that is really fun.  Here is a shot of the results from this race: 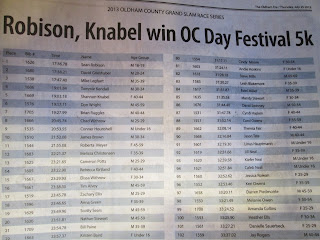 Finally, I do not love these running shorts from an appearance standpoint.  I really prefer to have a compression short either by itself or under a skirt for racing.  However, these shorts were amazingly dry!  Everything else was soaked and dripping, but the shorts seemed to wick the water and dissipate it into the air very quickly!  I don't know if I will wear them much for longer races, but they are OK in the heat.  They were free, as part of the team package, and that's the only reason that I have them.
Posted by Unknown at 3:58 PM