Team Tutu Bellas completed their 5th consecutive Tree Farm Relay!  We did this race last year too, although I realized I don't think I ever did a race recap for it.  It has been really fun to keep our same team over the years.  This is another one of those "races you always do races".  It has really grown over the years.  It used to be a given that we would place too because we could easily beat the Hella Bellas.  Last year we narrowly took 3rd, mostly because a team ahead of us on the final lap had a girl go down catastrophically and break her face in the crater, causing a DNF.  That wasn't how we wanted to do it.  It is just a fun race though, and between my crash and not training, Michelle not training, and Cristina riding mostly her TT bike, we were just in it for fun.    What we didn't realize until the very end would be how tight this race would be. 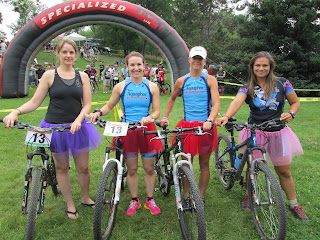 Ryan was able to get on a team this year too.  They started advanced, and his parents opted to keep the kids with them all day because it was overcast and it had rained the night before.  We had hoped Mindy and Eric could be on his team, but they needed a bigger training day.  They did hook Ryan up with a team, though, from Level Multisport.  Ryan was on a team with Adam, the owner, Janelle, an employee, and Steve, a customer.  They had a really strong race and finished 4th in the co-ed division.  Ryan did have a slight conspiracy theory as to why they were only 4th and not third.  Looking at the lap times, it only looked like the 3rd place team's girl went one lap instead of two, since there was only 1 lap that was different than all other laps.  Usually there are two laps that are slower than the others that are the girls.  Also, we know some pretty fast ladies, and knew for a fact their lap times, and this team had 7 splits way faster than our fastest friends and competitors. 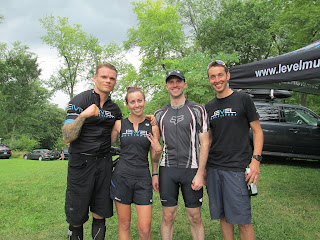 As always, the advanced riders started first.   I don't have a great picture of their start.  I did get a picture of me and Stephanie.  She was the only lady I knew that rode advanced. 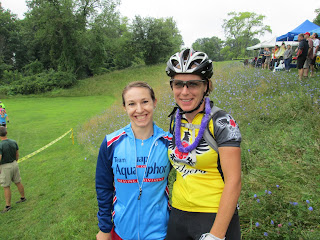 Ryan prior to his first lap 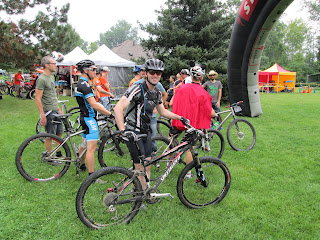 Me and Ryan before his first lap 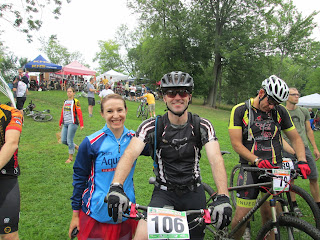 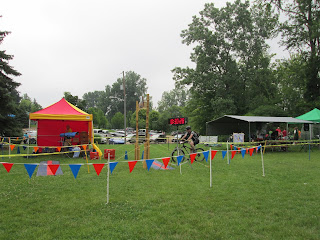 The handoff to Janelle: 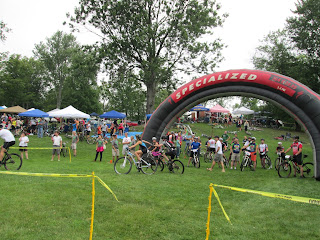 Me before the start and Ryan after his first lap. 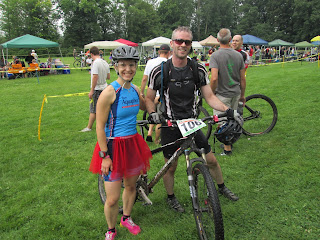 So great to be able to enjoy a day of racing with my man! 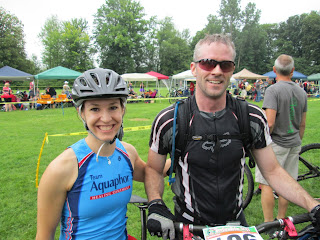 They changed the start a little bit.  I had asked to go first, because I tend to do better when I have more riders around me to help me push the pace.  This was sort of cancelled out by the fact that they had us do a wave start, with sport men first, co-ed second, and women third.  This is the co-ed start.  It was the most "colorful". 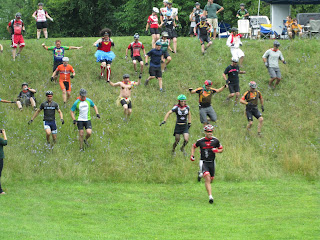 I only started with 4 other ladies.  Not a lot of people. 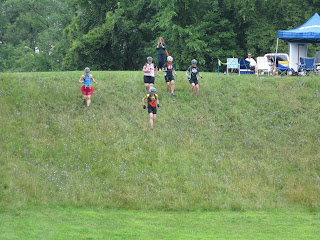 I managed to start in second after the lemans style start.  I held onto my position until a tricky switchback section where I unclipped and got passed.  Then I just couldn't hold onto the pace of the ladies in front of me.  I knew I was being a bit tentative, but I didn't crash.  I did have a little trouble with a couple hills, but nothing terrible.  I think this was my worst ever split for this race historically speaking, but considering all things, I wasn't that unhappy.  I did slow down a couple times to let advanced riders pass, and I did pass a few of the co-ed riders 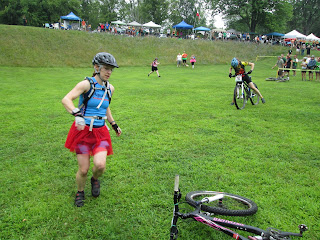 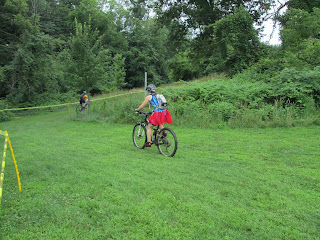 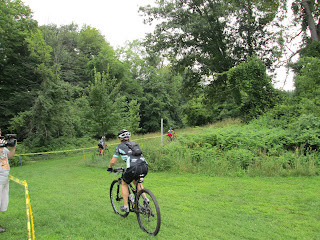 We also learned that there should have been 7 teams that started with me, not 5.  Thankfully we got that straightened out and they added 5 minutes back to the first lap time to account for them starting in the wrong wave.  We jostled back and forth between 2nd and 4th depending on who was riding.
My camera battery started to die, so we didn't get pictures of all the exchanges, but I have a few of them. 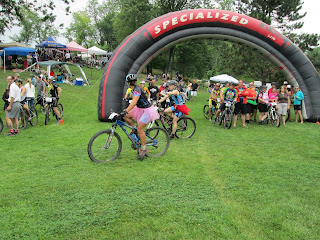 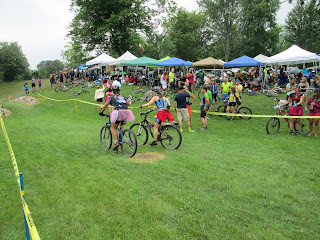 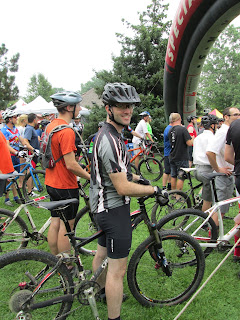 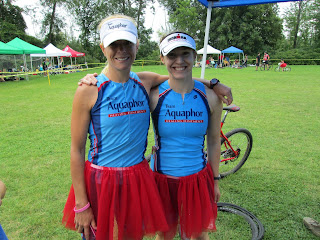 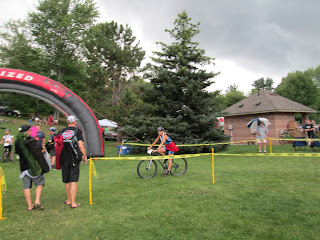 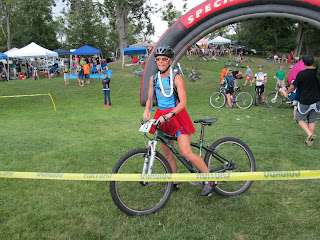 The finish was crazy!  The first place team came in smoking fast.  Then, the second, third, and fourth (us) place teams all rode in within 21 seconds of each other!  So crazy that a race that was almost 4 hours long came down to such a short margin!   All of us felt like we could have done 5-10 seconds faster somewhere!  The good part is that it was just for fun.  I do have a lot of work to do for iceman.  I am not sure exactly how to train for it best in KY, but hopefully my overall endurance will be high enough that I'll be OK even if I am not used to being on the mountain bike that long.  It was also my third weekend in a row of racing!  I can't believe that Muncie was just 2 weeks ago still!  It was also really fun to meet Ryan's teammates.  Level Multisport opened after I moved from MI. 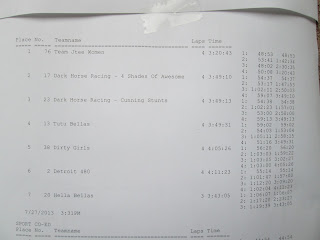 Also, being tree farm, there were costumes aplenty! 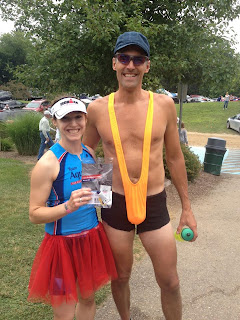 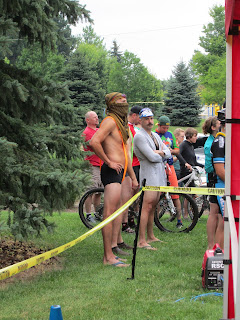 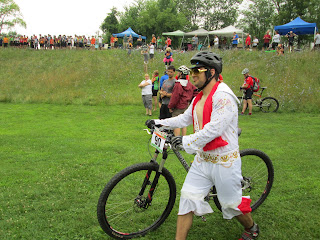 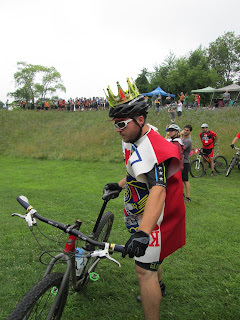 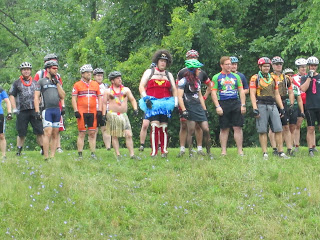