As usual, I'm way behind on race recaps.  The OC Grand Slam 5K is a 4 race series of 5Ks in different locations in Oldham County, each having a different beneficiary.  Last year, I was a pretty solid second place for the overall series award, a Louisville Slugger bat.  This year, it was a much tighter race.  Also, I am usually more concerned with getting a specific time than winning races, but this series really brought out the competitor in me because it was so close. 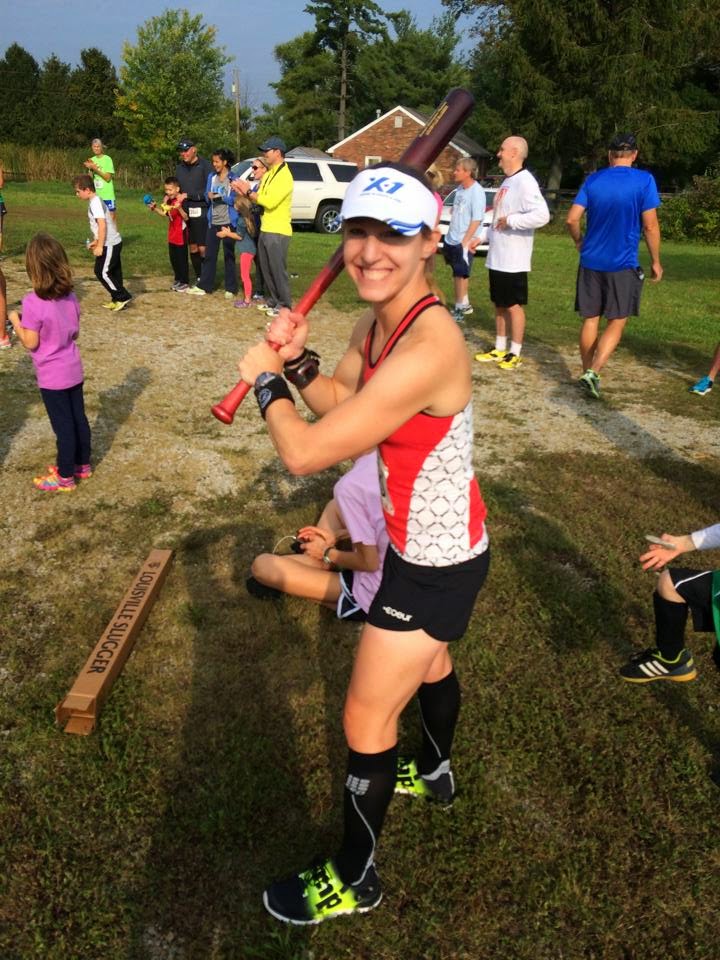 This is a fun race because it is right by my house.  CBC is in front of my neighborhood, so I can walk to it.  Noelle was doing the whole series, and Terri was doing all but 1, and Courtney and her daughters planned to do the entire series. 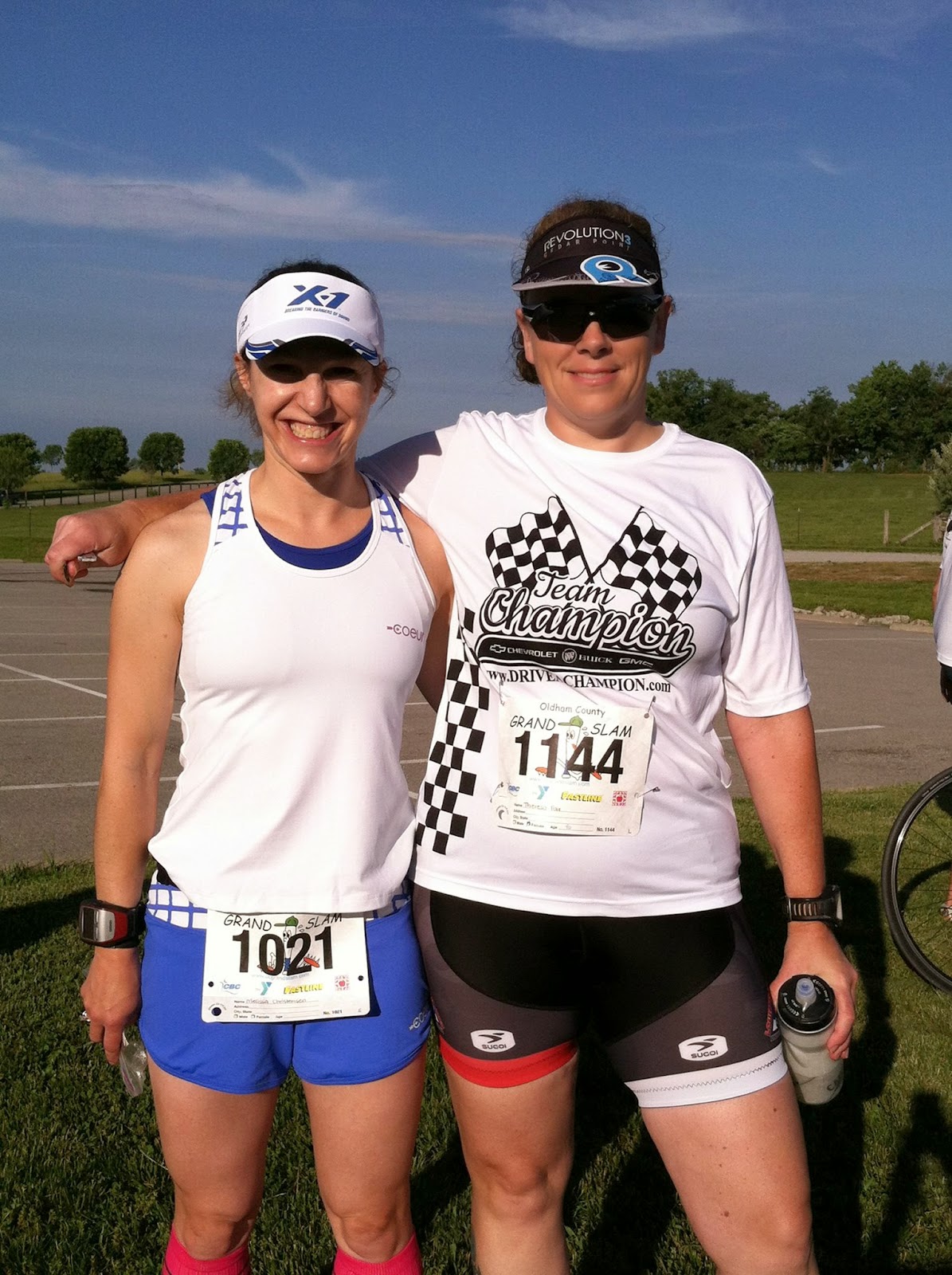 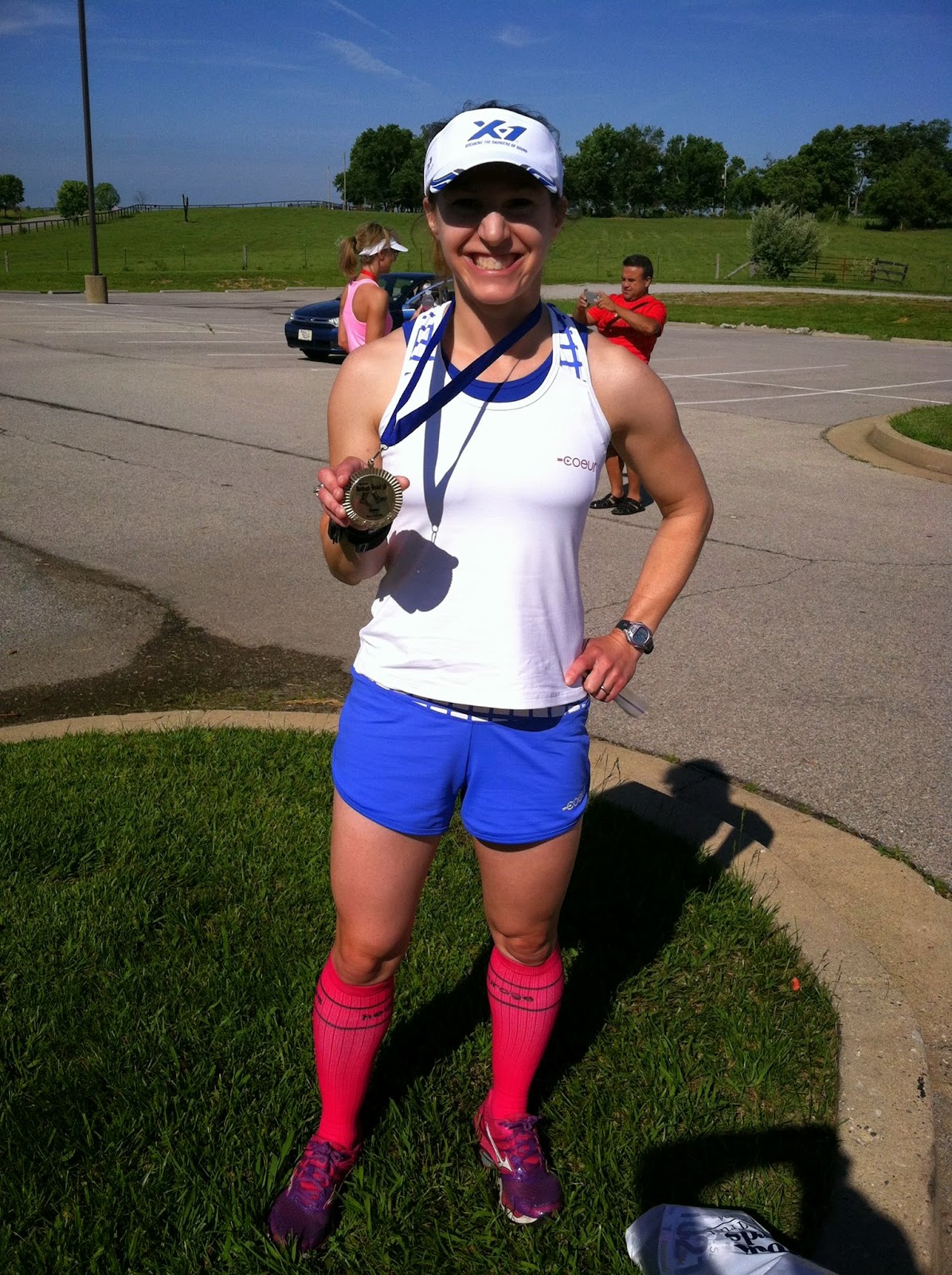 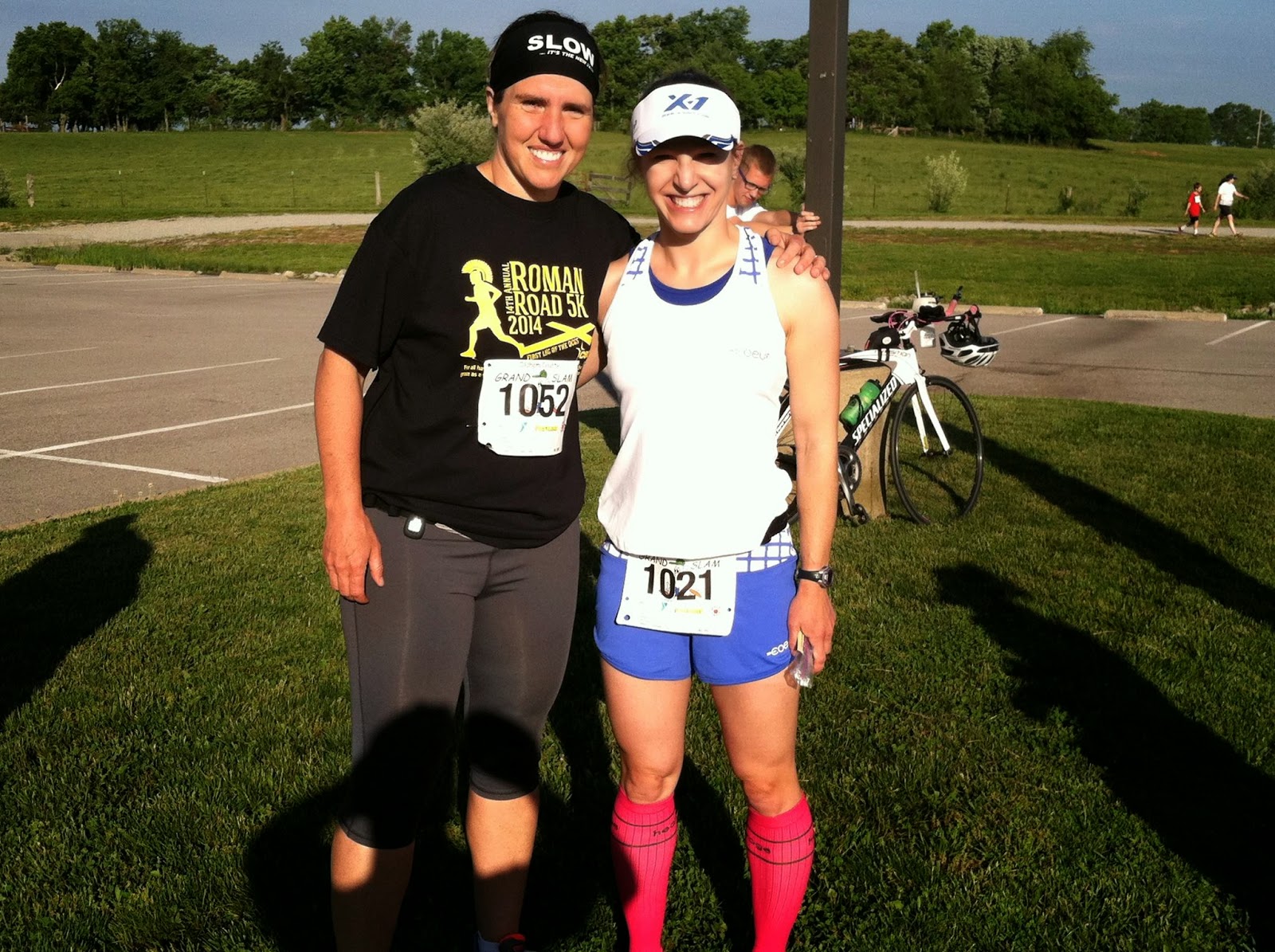 It was warm, and I had an OK race.  Being that it is on my "home turf " so to speak, I was a little disappointed with my race.  I felt pretty good for most of the race, and was behind Grace and another woman for a lot of the race.  On the uphill coming out of Kenwood, I passed Grace, but she passed me again on the way up a hill in the CBC parking lot.  Initially, I wasn't stressed about it, because I knew she wasn't in my age group (she is 11 I think?).  I was a big chunk behind Tracy, who was the winner.  I took first in my AG, and was third overall, about 15 seconds behind Grace.  After the race, I realized how poor a decision it was for me to not try harder to beat her because she could get me in the series!!! My time was over 23 minutes, so I was a bit bummed about that too.  I think last year's time was faster.  I wasn't very speedy today.

This is a Friday evening race, and it was a ton cooler this time around than last year.  It was like running in an inferno last year, and the course is 1.5 miles downhill, and then pretty much 1.5 uphill.  So it was nasty last year.  This year, it was rainy, and perfect temps for running.  Tracy, who won the first race, was not there!  Wow!  Maybe I had a shot at an overall win here today.  However, Roberta Meyer was here, and she won the series last year.  She was coming off an injury, which is why she wasn't at the previous race.  I ran a strong race.  I flew downhill, passed Grace and Roberta, but there was another woman who won the race that was not at the first race.  I was faster than my time last year, with a 22:07.  So close to being under 22!  I haven't been under 22 in a long time.  I was 2nd OA and first in my AG. 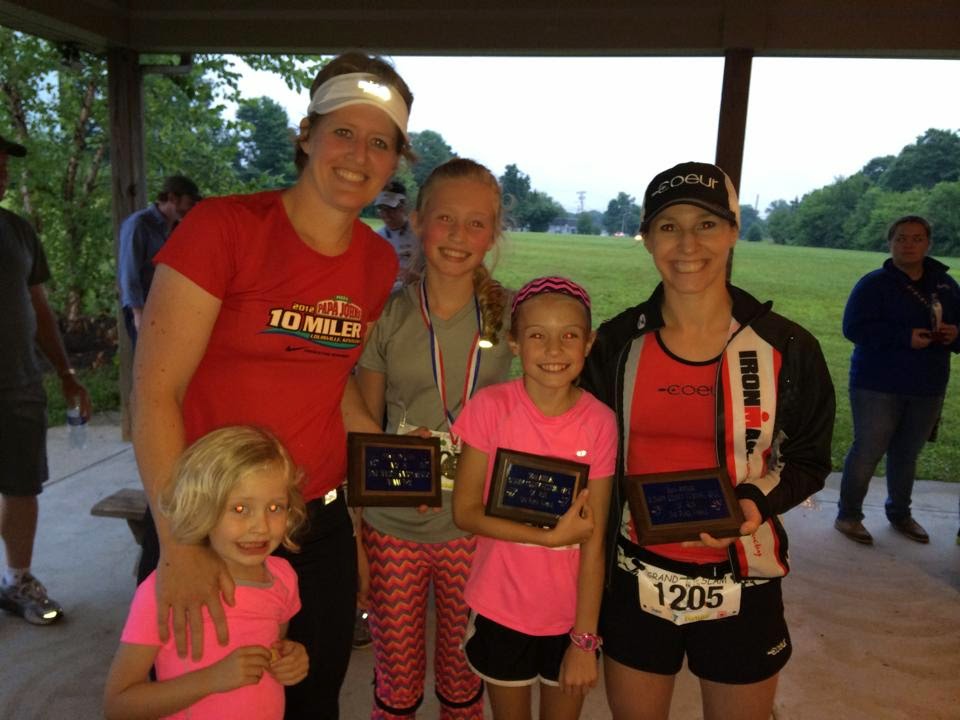 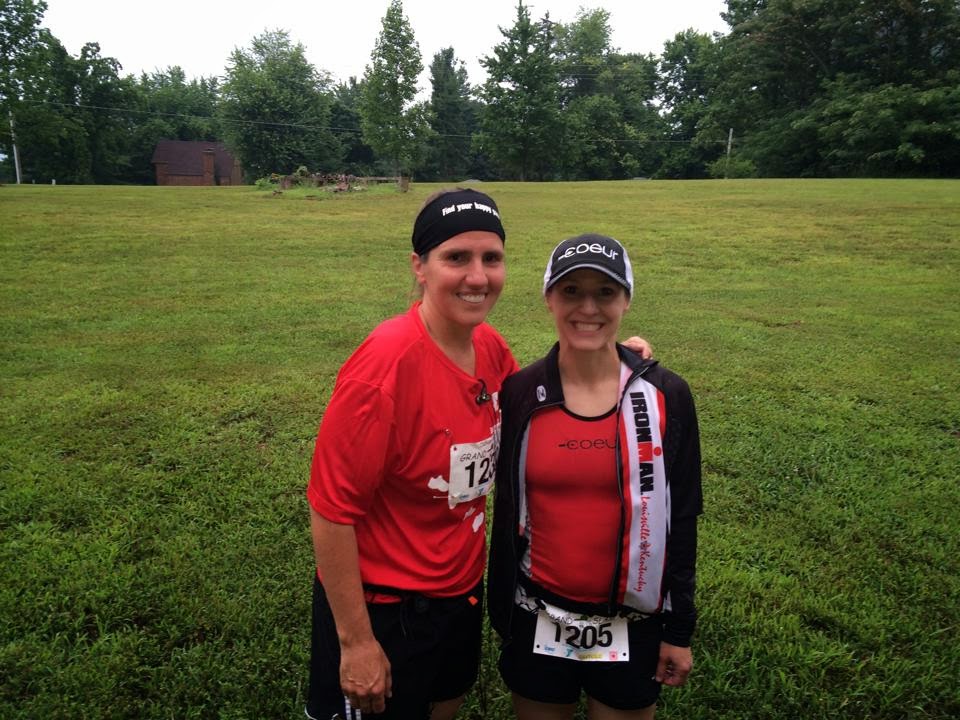 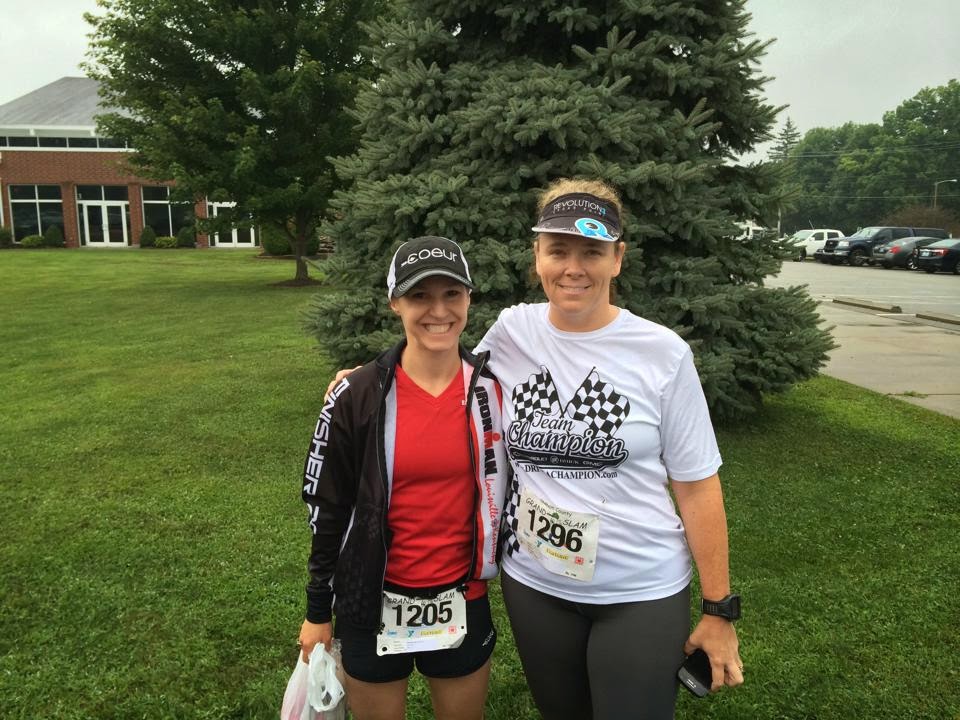 This race is on Saturday, and goes through a neighborhood.  Becca was here today, and unfortunately, Courtney had a childcare issue, and opted to not run.  I felt super bad because she could have been an overall contender because she wasn't far behind me or Grace, and my Ryan could have totally watched her kids for her at our house.  Also, Becca's husband was there and watched their kids at the race.  They actually rode around on bikes cheering for everyone.  I finished just before it started raining.  Tracy was back at this race, so she took 1st, and I was second, with a smaller margin over Grace this time, who was third. Becca was super excited to win her AG too!  I squeaked in just barely under 22, with a 21:55. 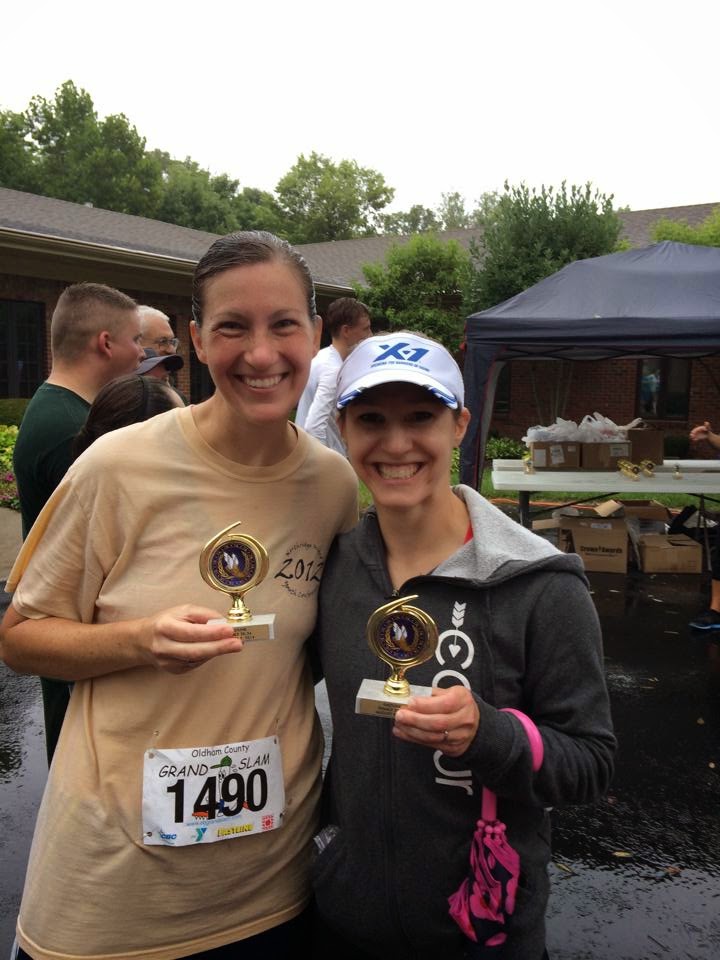 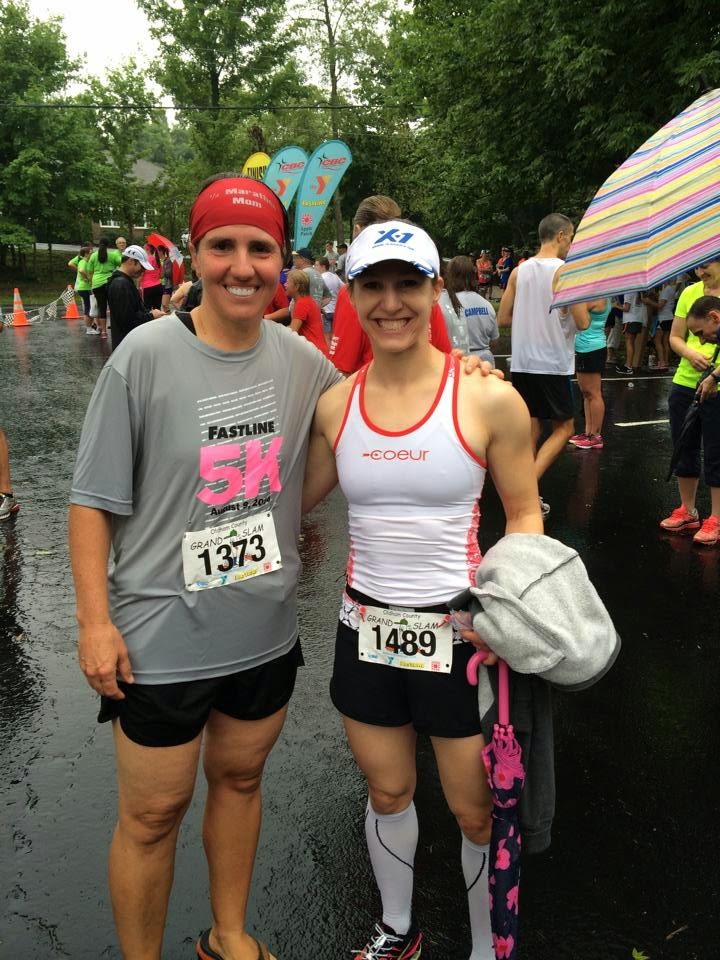 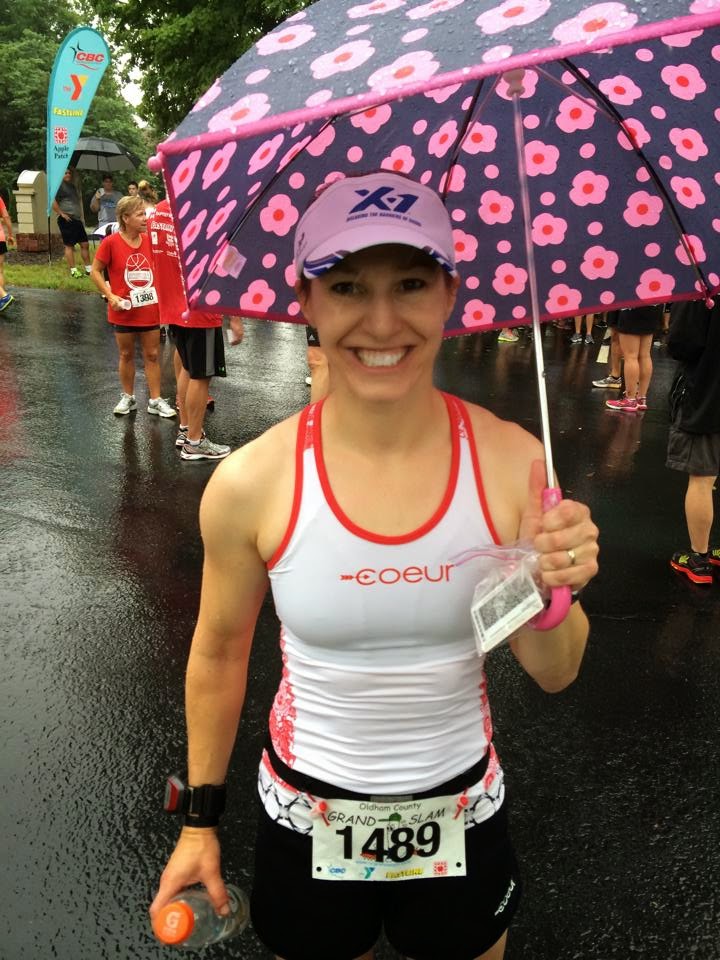 This was the final race.  I was getting really nervous and excited about this race.  Ryan had been invited to go to MI for a UM game, so I had to ask Courtney if her Ryan would watch my kids too.  Thankfully, he was able to, because the whole reason I didn't go to MI (and miss out on a fall trip with cider and donuts and farms and fun) was to attempt to win the series.  I was in the lead because Tracy missed the one race, and I had built up a bit of a cushion over Grace.  I didn't have to beat her to win the series, but I really wanted an overall win.  It seemed a bit lame to me to win the series without winning an overall race, but attending and racing all 4 is the point of the series award.  The course is a bit challenging (as they all are in the OC, its not flat anywhere), and Grace and I were neck and neck behind Tracy the entire time.  She'd get a little ahead and then I'd get ahead and we went back and forth.  I had been reading Iron War, and I kept thinking that this must have been similar.  On the final turn, Grace almost missed it and swung really wide, and I made up a little bit of ground on her, but she surged ahead.  Then I saw the finish line and sprinted in, with a 1 second lead over Grace on our watches, and a 21:31, so close to my PR of 21:22 from 2011.  I had done it!  I had won the series!!!!  I had my opportunity and I took it. 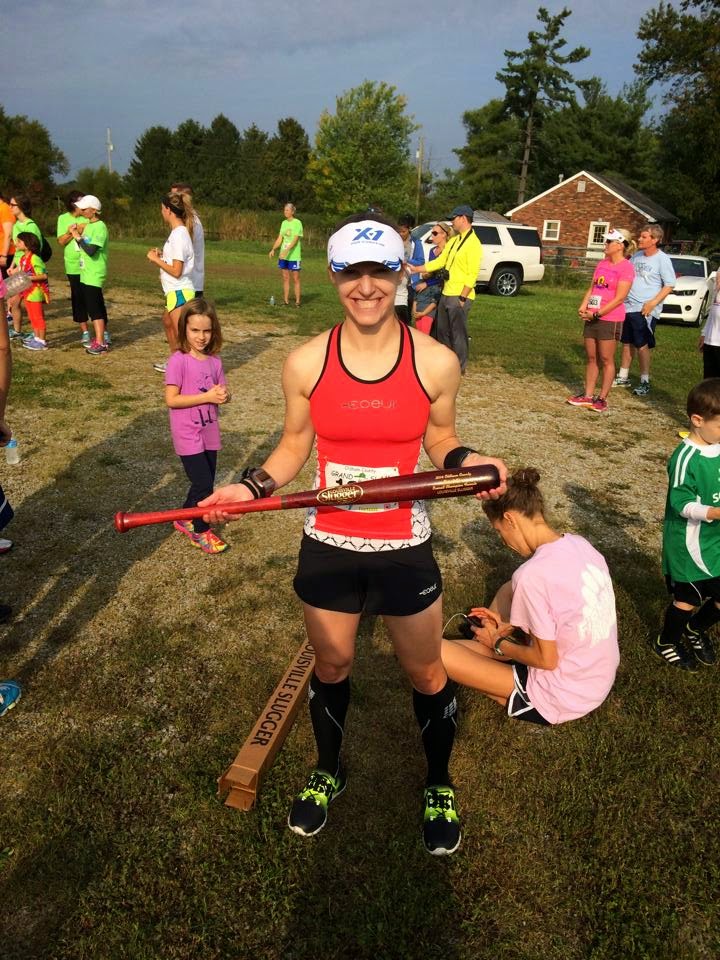 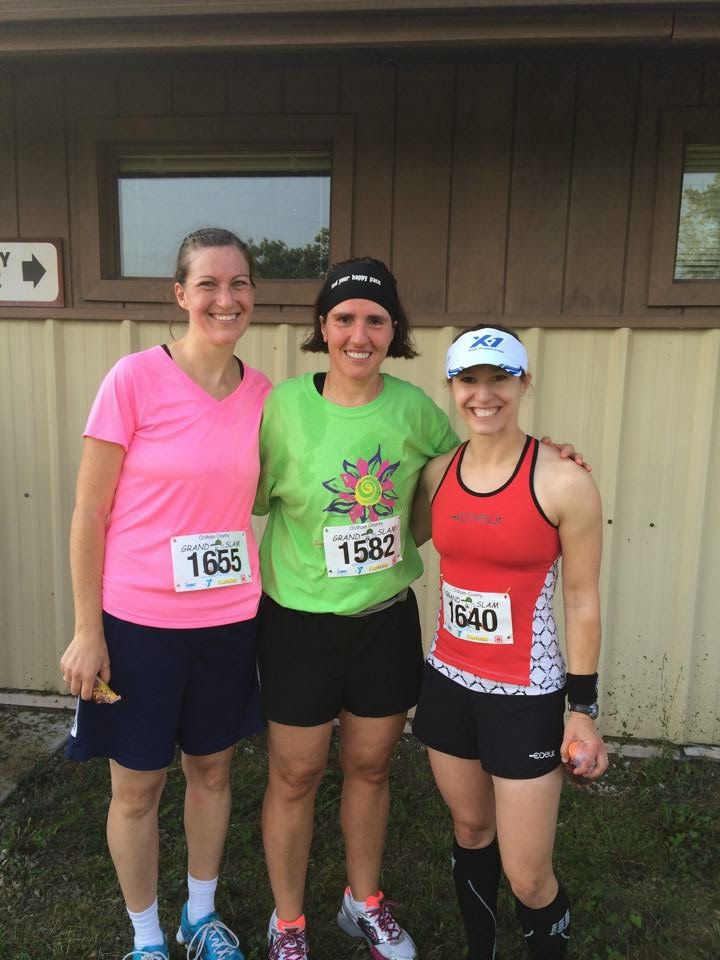 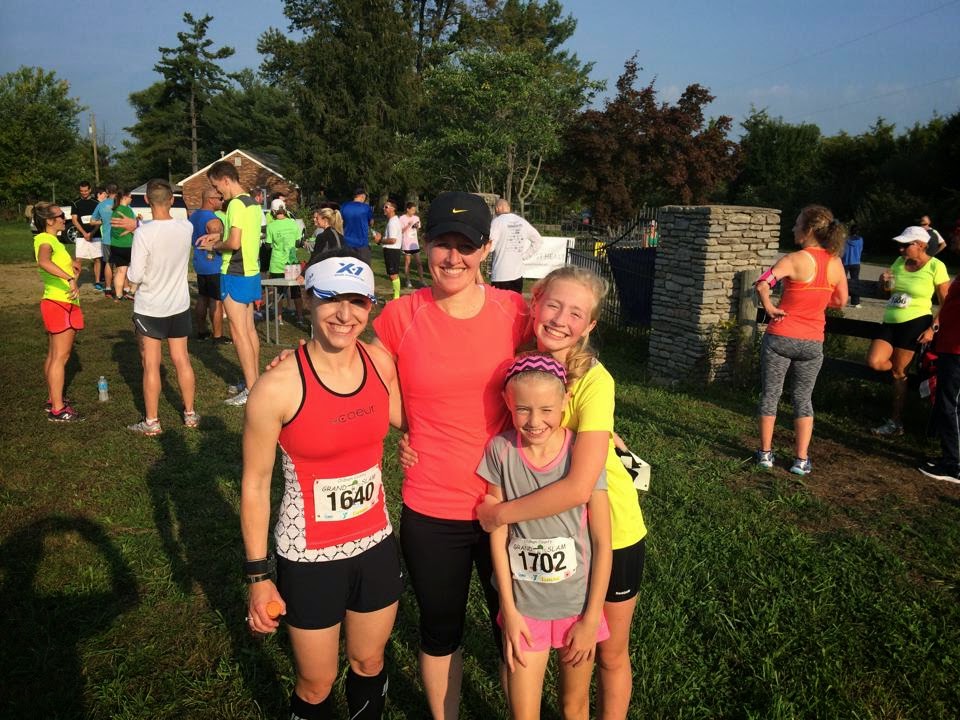 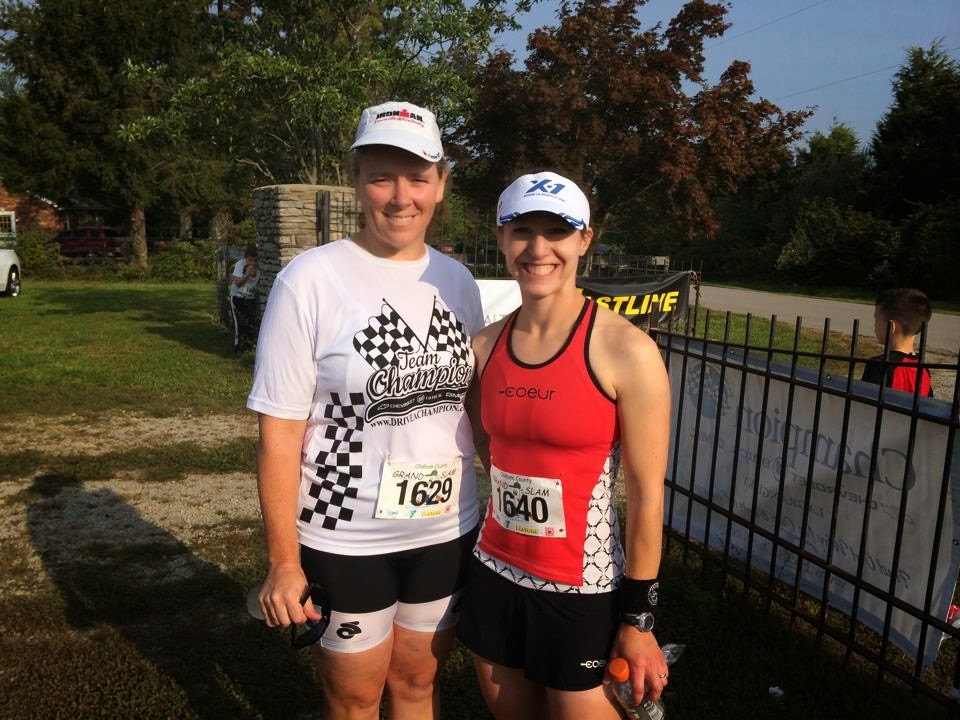 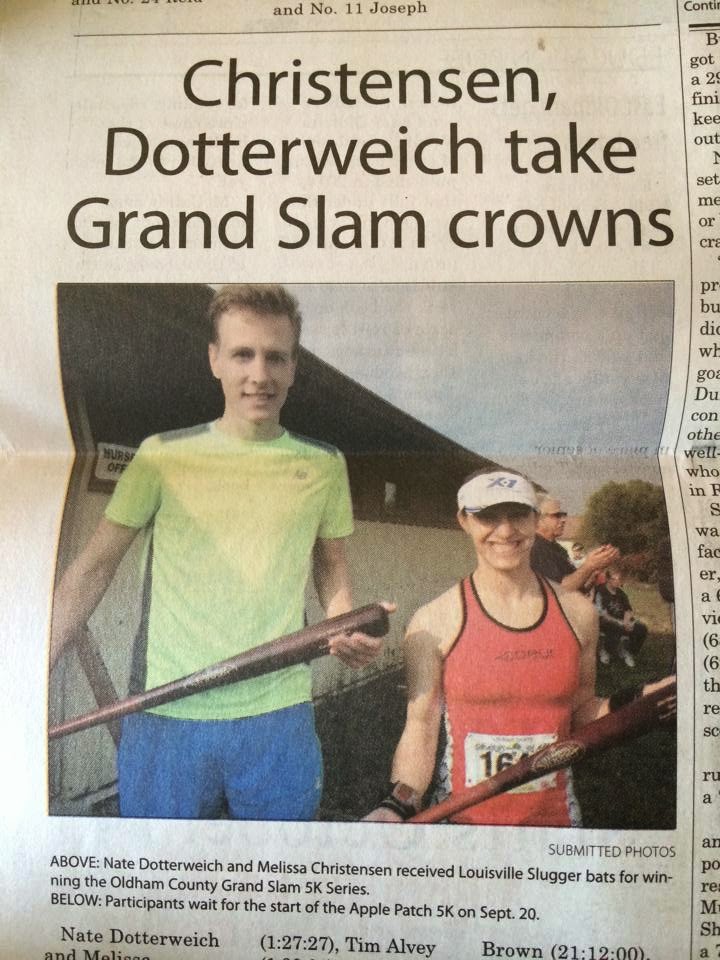 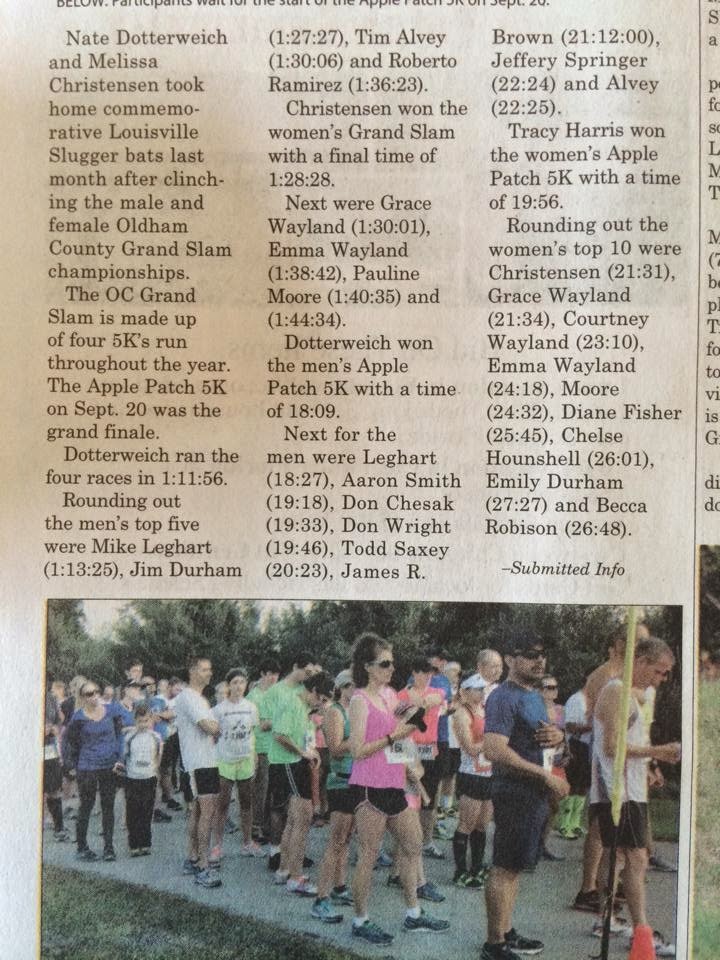